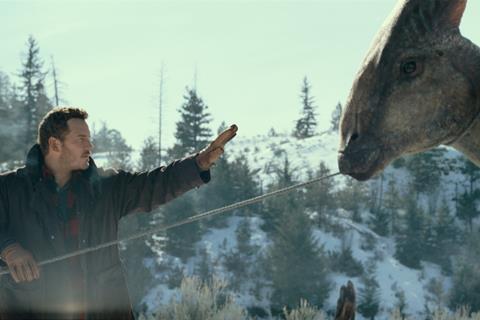 UPDATED: Mexico proved the hero nation for Universal’s release of Jurassic World Dominion – the third film in the World series, and the sixth Jurassic film overall. A confirmed $18.1m in Mexico provided nearly one third of the $55.7m weekend total from 15 early international markets, which also included South Korea, Brazil and Italy.

Overall, the $55.5m debut was in line (+1%) with the openings of the two earlier Jurassic World films in the same suite of markets, excluding previews. Those two films went on to achieve final tallies of $1.67bn (Jurassic World, 2015) and $1.31bn (Jurassic World: Fallen Kingdom, 2018). We might expect to see a further drop with the third World film, but the inclusion of Jurassic Park actors Sam Neill, Laura Dern and Jeff Goldblum, joining World stars such as Chris Pratt and Bryce Dallas Howard, may serve to give the new film a bigger box office punch.

In Mexico, Dominion delivered the biggest ever opening for Universal and the eighth biggest of all time, and accounted for an 82% market share in the territory. The film also achieved the third biggest opening of the pandemic in Mexico, beaten only by Spider-Man: No Way Home and Doctor Strange In The Multiverse Of Madness – and it similarly achieved the third biggest opening of the pandemic (for a US film) in South Korea, thanks to $15.2m debut, including previews. (For the three-day weekend, South Korea was led by local chart champ The Roundup, which added another $10.4m, for a total north of $60m.)

In Brazil $4.3m for Dominion represented Universal’s biggest pandemic opening and the eighth biggest industry debut of all time, both excluding previews. The debut is just behind Jurassic World, but ahead of Fallen Kingdom as well as current hit Top Gun: Maverick.

Italy’s $3.4m likewise ranks as Universal’s biggest pandemic opening. Saturday’s overall market in Italy was soft thanks to the Italy-Germany Nations League football match which recorded 5.8m viewers in the country – but despite this the opening box office was just below Fallen Kingdom and ahead of Top Gun: Maverick.

Jurassic World Dominion faces its full market test when it lands in North America this Friday, as well as a wide sweep of international territories this week including China, UK/Ireland, France, Germany, Australia and Spain.

UK/Ireland remains the top international territory, with $12.9m for the second session, down just 9% from the opening three-day (Friday-to-Sunday) number. Total after 12 days (including previews) is a mighty $48.4m.

The original Top Gun grossed $180.3m in North America and $177.0m for international – so the sequel is already 54% ahead of that global lifetime total, albeit not adjusted for ticket price inflation.

So far, there is no release in China or Russia scheduled for Top Gun: Maverick. South Korea welcomes the film on June 23.

UPDATED: After five weeks of release, Doctor Strange In The Multiverse Of Madness has now reached $910.3m globally – with a confirmed $521.6m from international markets and an estimated $388.7m in North America. The latest weekend saw the multiverse-themed adventure add a confirmed $12.5m in international markets and $9.3m in North America, earning third place in the worldwide box office chart.

Doctor Strange 2’s $909m total has been achieved without benefit of China (where the film has yet to be allocated a release date) and Russia – and is now 34% ahead of the $678m lifetime global total achieved by Doctor Strange back in 2016. That earlier film benefited from a combined $131.5m in China and Russia.

UPDATED: Universal’s release of DreamWorks Animation’s The Bad Guys is enjoying a seventh consecutive week in the top five of Comscore’s worldwide chart, thanks to weekend takings of $8.8m for international (up 34%) and $3.3m in North America (down 24%). Totals are respectively $130.8m and $87.3m, combining for $218.1m worldwide.

The weekend saw The Bad Guys open in Ukraine – delivering a confirmed $133,000 from 142 sites, including previews. Cinemas are beginning to reopen in the west of the country.

Sony has announced debut box office for two new local language titles from Sony Pictures International Productions, released at the weekend in India and Japan. Major, starring Adivi Sesh (Kshanam), is a biographical drama following the life of Major Sandeep Unnikrishnan, who was killed in the 2008 Mumbai attacks. The film opened with $3.5m from five markets, including $3.4m in India.

Way Of The Househusband, a Japanese live-action film based on the Kousuke Oono manga series, debuted in Japan with $1.0 million from 347 screens. The comedy depicts the everyday life of a fearsome former Yakuza boss who retires and becomes a mild-mannered househusband supporting his working professional wife. The manga was previously adapted into both a live action TV drama by Nippon TV, and an anime TV series for Netflix.

The release of My Blue Summer has helped a Covid-weakened China box office deliver its best weekend total ($26.7m) since the first weekend of March, according to figures by Artisan Gateway. Bin Huang (You Are My Sunshine) directs the romantic drama about a university student (Sophie Zhang) who meets her former crush (Yunlai Xin). My Blue Summer tops the China box office with $7.2m for the June 3-5 weekend (and $8.5m including Thursday previews), ahead of Universal/DreamWorks Animation’s The Bad Guys (with $6.3m). The market was boosted by the Dragon Boat Festival holiday.