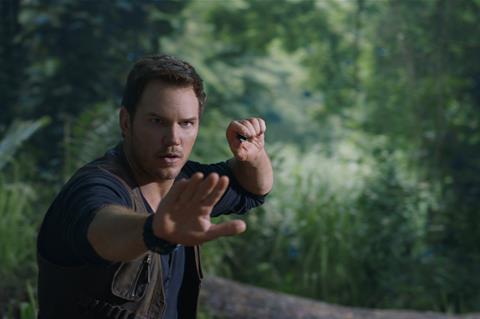 Jurassic World: Fallen Kingdom stormed out of the gates this weekend with a £14.3m opening, including £3.7m in previews.

The film dominated the Friday-Sunday period with a hefty £10.6m, almost 10 times the figure of the film second in this week’s chart (Solo: A Star Wars Story), despite the good weather across the UK.

Jurassic World: Fallen Kingdom is the second highest Friday-Sunday opener of the year to date, behind Avengers: Infinity War on £23.1m (£29.4m with previews), and ahead of Marvel’s Black Panther (£10.5m). Black Panther had an official opening of £17.7m from six days.

However the film opened below its predecessor Jurassic World, which grossed  £16.8m  on its opening weekend (£19.35m with previews).

Despite signs of recovery in its second week, Solo: A Star Wars Story dropped a hefty 62% this weekend, adding just £1.2m for a disappointing £16.4m to date.

In its second week, Book Club posted a good hold, dropping just 26% and moving up one place in the chart to fourth. The film added £507,000 and now sits on £2m.

McQueen, the feature documentary about UK fashion icon Alexander McQueen, opened to a strong £131,202 from 64 cinemas, a site average of £2,050. The film looks set to expand into further sites this coming weekend.