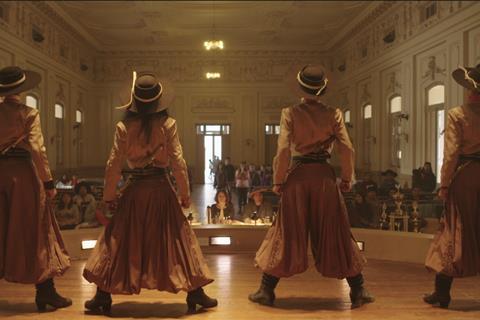 Karnawal and Restless (Desasosiego) won top honours at the Primer Corte awards handed out at the closing ceremony of Ventana Sur in Buenos Aires on Friday (6).

Coproduced by Argentina, Bolivia, Brazil, Chile and Mexico, Karnawal (pictured) took the European Vision and Le Film Français awards at the afternoon presentation at the market headquarters, located at UCA in Puerto Madero

Directed by Buenos Aires filmmaker Juan Pablo Félix, the drama follows the footsteps of a dancer who, shortly before participating in an important competition, receives a visit from his father, who may threaten his dream.

Restless, a co-production between Costa Rica and Mexico, earned the Sofia Films award and the Lamayor Cine prize of Ventana Sur, organised by INCAA, Argentina’s National Institute of Cinema and Audiovisual Arts, and the Marché du Film/Festival de Cannes.

The recognition for Restless, directed and produced by Paz Fábrega and Patricia Velásquez, respectively, was in line with one of the focuses of this year’s programming, which was gender equality. It exposes the story of a 17-year-old girl who tries to have an abortion but finds out at the clinic that she has no longer that choice, and is forced to carry the pregnancy to term.

Still from the Primer Corte sidebar, Alexandra Henao Sierra’s Gilma (Venezuela) and Alejandro Telémaco Tarraf’s Lonely Rock (Argentina/Mexico) shared the NMF and Color Front award, another major recognition. Gilma tells the story of a teenager who looks after her aunt, a victim of domestic violence, while Lonely Rock (Piedra Sola) portrays life in the Argentinian highlands where an invisible puma kills the livestock.

In the Copia Final category of Ventana Sur this year, the winner of the Visión Europea award was Rodrigo Ruiz Patterson’s Summer White (Blanco de Verano) from Mexico. The story of a solitary teenager who doesn’t accept her mother’s new boyfriend will benefit from post-production and distribution services.