Committee of nine major film organisations has issued a set of demands to ensure the festival’s independence. 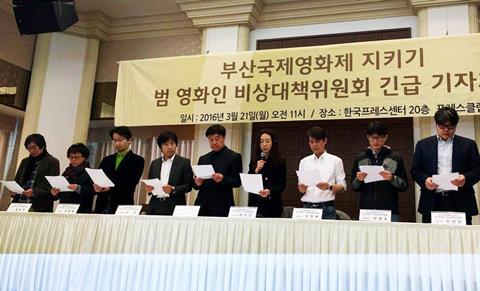 Key members of South Korea’s film community have announced today that they will boycott the Busan International Film Festival (BIFF) if Busan City does not stop interfering with the festival.

Today (March 21), the Korean Film Group’s Emergency Committee for Defending BIFF’s Independence, a gathering of nine major film organisations including the Korean Film Producers’ Association, the Directors’ Guild of Korea and the Federation of Korea Movie Workers’ Union, held a press conference in Seoul to make the following demands to ensure the festival’s autonomy and independence:

Despite having made a gesture to step down as BIFF organizing committee chairman, Busan mayor Suh Byung-soo cut short last month’s festival assembly at which participants called for a special assembly where revisions to the festival’s articles of association could be made to ensure autonomy and independence.

Busan City has since filed an injunction against 68 newly appointed advisors to the festival including internationally renowned filmmakers such as Park Chan-wook (Stoker), Ryoo Seung-wan (Veteran), Choi Dong-hoon (Assassination) and top stars such as Ha Jung-woo (The Chaser) and Yoo Ji-tae (Old Boy).