Live cinema report in the works

EXCLUSIVE: Research will explore the growing live cinema industry in the UK. 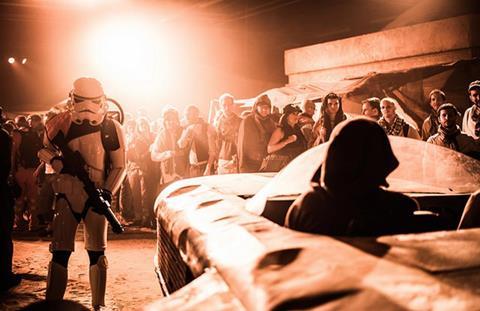 Live Cinema UK is to carry out the first piece of national industry research on the live cinema industry, funded by Arts Council England Grants for the Arts.

The report, to be titled ‘Live cinema in the UK, will aim to identify the economic  value and impact of events such as Secret Cinema - film screenings accompanied by immersive theatre, live soundtracks or other experiential activity.

Surveying the industry as a whole alongside live cinema public audiences, the research is set to produce a searchable online database of projects, artists and exhibitors in a bid to encourage further collaboration between the film and arts sectors.

Artists including DJ Yoda, British Sea Power and Asian Dub Foundation will continue to a series of online videos covering their experiences of creating live music to film screening.

The film report will be published in May 2016 to coincide with the first International Live Cinema Symposium and the launch of the first academic journal issue dedicated to Live Cinema (Participations: Journal of Audience & reception Studies, Edited by Atkinson and Kennedy).

The initial findings of the research and economic impact will be discussed later this year as part of This Way Up: Exhibition Innovation conference at HOME Manchester on December 2/3.

Lisa Brook, director of Live Cinema UK said the Arts Council’s funding of the research showed “a commitment to supporting artists and producers who take the moving image as inspiration for the creation of art, thrilling audiences around the UK.”

The research is being carried out with the University of Brighton, with contributing partners including Film Hubs North, North West Central and Scotland as part of the BFI Film Audience Network, This Way Up conference, HOME Manchester, Sensoria Festival, Leeds International Film Festival, Sneaky Experience and the BFI.

A call for participants will take place in August. Artists, exhibitors, distributors and producers interested in the project can email info@livecinema.org.uk to register their interest.