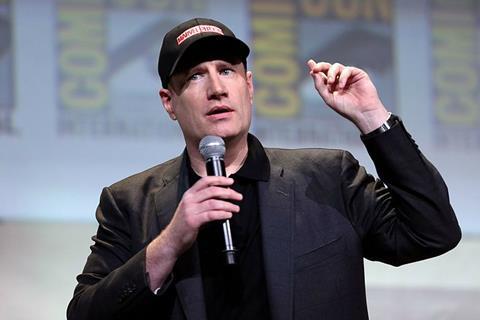 Horn said: “We are excited about the projects Kathy and the Lucasfilm team are working on, not only in terms of Star Wars but also Indiana Jones and reaching into other parts of the company including Children Of Blood And Bone with Emma Watts and Fox. With the close of the Skywalker Saga, Kathy is pursuing a new era in Star Wars storytelling, and knowing what a die-hard fan Kevin is, it made sense for these two extraordinary producers to work on a Star Wars film together.”

Feige has been president of Marvel Studios since 2007, with films produced by him grossing around $25bn at the worldwide box office to date.

The final film in the ‘Skywalker saga’ – Star Wars: The Rise Of Skywalker – is set for release this December.

Other future Star Wars film projects include a trilogy produced and written by Game Of Thrones showrunners David Benioff and D. B. Weiss, and another trilogy written and directed by Rian Johnson.

On the TV side, upcoming projects include John Favreau’s The Mandalorian, as a well as live-action series’ based on Cassian Andor and Obi-Wan Kenobi, all for Disney+.