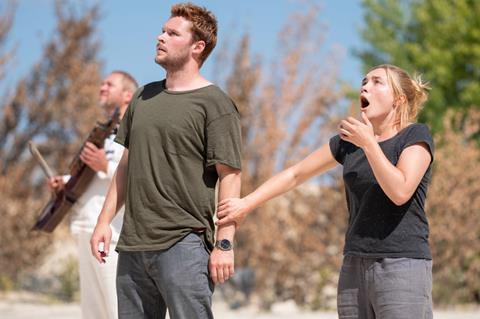 The screening of the out of competition film on October 15 at Brooklyn Army Terminal in New York is followed a day later by a drive-in presentation of Dan Krauss’s war thriller The Kill Team starring Alexander Skarsgård.

The five-day showcase of Nordic cinema including the Faroe Islands runs October 15-20 and is in partnership with A24 and Rooftop Films.

The virtual line-up is open to audiences around the world and includes world premieres of Jan Vardøen’s drama Oslo: Copenhagen (Norway), Gianluca Iumiento’s drama Novemberoslo (Norway), and Søren Peter Langkjær Bojsen’s sci-fi A Report On The Party And The Guests (Estonia/Denmark).

Trond Kvig Andreassen’s documentary Everything That Could Have Been (Norway) gets its North American premiere, and there are US premieres for Force Of Habit (Finland), a film from seven directors about the lives of women over the course of a day, and Johanna Aust’s family drama Petra And Peter (Sweden).

Festival founders Linnea Larsdotter and Johan Matton have arranged for 50% of online ticket sales to be donated to organisations supporting Black Lives Matter. The festival will also purchase carbon offsets for all cars attending drive-in events.