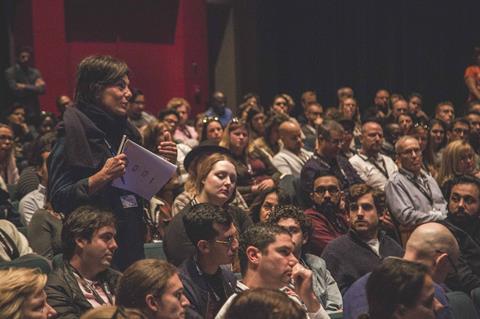 Mike Leigh, Jason Reitman and Sebastian Lelio are among the additions to the TIFF Industry Conference set to kick off during next week’s Toronto International Film Festival (TIFF).

TIFF artistic director Cameron Bailey will interview on stage the actor and director of Hidden Man Jiang Wen in a Masterclass session on September 12. The event is one of several featuring fimmakers, executives, and media personalities.

On September 7 Chilean auteur Lelio, whose Gloria Bell receives its world premiere, joins exhibitors and filmmakers in ‘Going To the Movies: Why Cinemas Matter’, a panel moderated by National Association Of Theatre Owners chief John Fithian that will examine the impact of theatrical exhibition on today’s culture and the ways in which exhibition drives revenue for the industry at large.

A day later tech investor Prashant Matta and Dead Poets Society and Emma producer Steven Haft of the Blockchain for Social Impact Coalition will deliver a keynote about the potential impact of blockchain.

Joel Edgerton, director of TIFF international premiere and gay conversation therapy drama Boy Erased, will join the book’s author Garrard Conley and senior vice-president Laura Kim of Participant Media, which was involved in this year’s Oscar-winner A Fantastic Woman, in a session on September 8 hosted by LGBT media monitoring group GLAAD to explore how the organisation addresses key community issues and the importance of onscreen representation to change hearts and minds around the world.

Reitman will take part in the ‘3 For 30’ screenwriters session on September 9 hosted by Franklin Leonard and Kate Hagen from The Black List in which writer-director film teams dissect a scene.