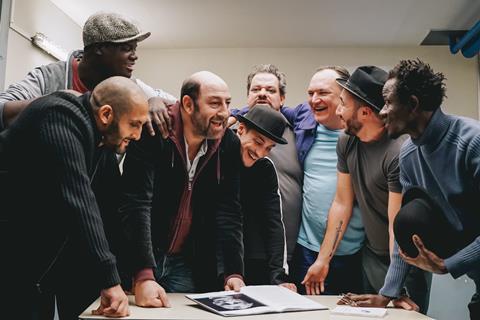 Paris-based mk2 films has unveiled first deals on its Cannes 2020 label titles The Big Hit and Here We Are, which it screened in the recent virtual edition of the Marché du Film at the end of June.

In the rest of the world, deals have been done for CIS (Russian Word Vision), Brazil (Imovision) and Taiwan (Andrews Film).

Negotiations are underway for China and airlines as well as a number of other European territories.

The film was among five comedies included in Cannes’s special 2020 Official Selection, which was created after its physical edition was cancelled due to the Covid-19 pandemic to support films seeking a theatrical release in the coming months.

It is a second feature for screenwriter-filmmaker Courcol, whose recent screenplay credits include French box office hit In The Name Of The Land, which he co-wrote with director Edouard Bergeon.

Kad Merad stars as a struggling actor who takes a troupe of convicts on tour with a performance of Waiting For Godot. It is inspired by a true story in which Swedish inmates of a high-security prison went on the run ahead of a public performance in the Gothenburg City Theatre in 1985.

Memento Films Distribution will release the film in France on October 28.

Israeli filmmaker Nir Bergman’s father-son drama Here We Are, which was selected in “The Newcomers” section of the Cannes 2020 label, has also secured a number of sales.

Popular Israeli actor Shai Avivi stars as a father who decides to hit the road with his young-adult autistic son rather than commit him to a special home. It is the fifth feature for Bergman whose previous credits include Berlin winner Broken Wings and Saving Neta.