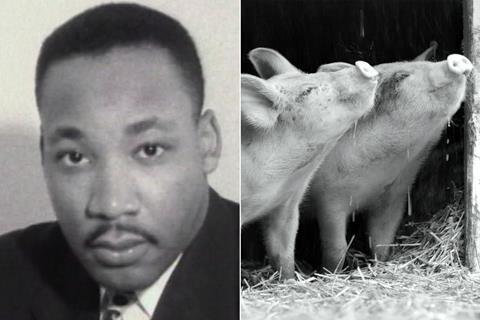 The European premiere of Sam Pollard’s MLK/FBI, and Victor Kossakovsky’s buzzy Berlin title Gunda are among the 18 titles selected for the Masters section at International Documentary Film Festival Amsterdam.

The festival has added 47 titles in total to the programme for its 2020 edition, which will take place both in cinemas in Amsterdam, and online.

Looking at the US government surveillance and harassment of Martin Luther King, MLK/FBI premiered at Toronto last month, and will be distributed by IFC Films in the US. Gunda follows the daily life of a pig, two cows, and a one-legged chicken; Neon acquired US rights in June, with Altitude to release in the UK.

Of the 18 titles in the Masters selection, one – Ulrike Ottinger’s Paris Calligrammes – is directed by a woman, while another – Julia Reichert and Steven Bognar’s 9to5: The Story Of A Movement – is co-directed by a woman.

The 11 titles in the Paradocs strand for experimental documentaries include Anders Edström and C.W. Winter’s 480-minute The Works And Days (Of Tayoko Shiojiri In The Shiotani Basin), representing daily life in a Japanese mountain village; and Éléonore Weber’s There Will Be No More Night, depicting the first-hand perspective of a fighter pilot through video footage from US and French forces in Afghanistan, Iraq, and Syria.

The festival has also added 18 further titles to its Best of Fests selection, which now includes 39 features, four mid-length films, and five shorts. New additions include Francesca Mazzoleni’s Punta sacra, which won the main prize at Visions du Réel; and Catarina Vasconcelos’ The Metamorphosis Of Birds, which received a FIPRESCI prize at this year’s Berlinale.