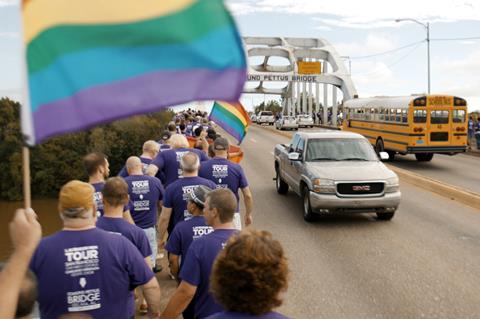 Sheila Nevins has made her latest acquisition since joining MTV Documentary Films and will line up an awards-qualifying release this autumn for Gay Chorus Deep South.

David Charles Rodrigues directed the Tribeca Film Festival premiere and winner of the audience award for best documentary before playing at festivals around the world. It will open Santa Barbara’s Call To Action Festival, and The Boston Globe’s GlobeDocs, Heartland, and New Orleans. among others.

Gay Chorus Deep South recounts the story of a walk by 300 singers from San Francsico Gay Men’s Chorus led by conductor Tim Seelig who travelled through the Deep South from Mississippi to Tennessee in a bid to overcome intolerance. They were accompanied by Oakland Interfaith Gospel Choir.

“The LGBTQ bias is fierce in southern states,” said Nevins. “Faced with unrelenting resistance, these brave men break barriers with song and continue to sing and raise their voices in the name of diversity.”

Nevins is on board as executive producer alongside Brian Chesky, James Goode and Tony Högqvist. Rausch Street Films produced and financed, with Bud Johnston and Jesse Moss serving as producers.

MTV Documentary Films brokered the deal with Endeavor Content on behalf of the filmmakers.