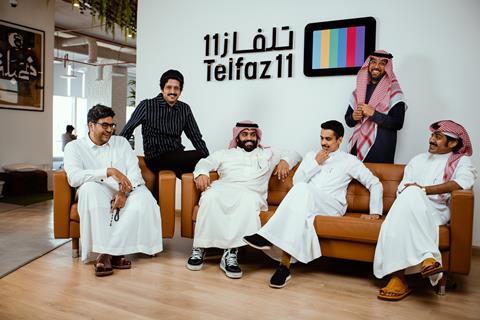 Netflix has struck a deal to produce eight feature films with Saudi entertainment group Telfaz11, in a move that marks a major breakthrough for the streaming platform’s drive to break into the Middle East.

Founded by Alaa Yousef Fadan, Ali Al Kalthami, and Ibrahim Al Khairallah around a decade ago, Riyadh-based Telfaz11 was at the forefront of Saudi Arabia’s YouTube youth content revolution in the early 2010s.

It gained international notoriety in 2013 with Hisham Fageeh’s viral videos such as No Woman, No Drive, and also produced popular local sketch shows series such as La Yekthar.

It has since developed into a major production and content financing group and is now poised to move into feature film following the lifting of Saudi Arabia’s 30-year cinema ban at the end of 2018.

The Netflix partnership entails the production of a mixed range of eight feature films, developed and produced by Telfaz11. The aim is for them to have broad appeal across both Arab and global audiences. The first project is expected to come online in late 2021.

The accord follows hot on the heels of an initial collaboration between Netflix and Telfaz11 on the recent film collection Six Windows In The Desert featuring six short films by Saudi directors. Launched on Netflix in March, it is still streaming on the platform.

Telfaz11 co-founder Kalthami’s 2015 medium-length work Wasati was featured in the collection. Based on true events, it revolves around a theatre production that was shut down after it was attacked by extremists.

Second co-founder Khairallah has also closely with Netflix in the past.  He was among four comedians representing the Arab world in Netflix’s 2019 stand-up comedy event series Comedians Of The World, featuring 47 comedians from 13 regions around the world.

“We are thrilled to partner with Netflix in an important validation of both our success at Telfaz11 and the region’s burgeoning production ecosystem. These eight films will showcase for global audiences the incredible culture, locations and talent that exists within both our region and the Telfaz11 filmmaker network,” said Telfaz11 CEO and co-founder Alaa Fadan.