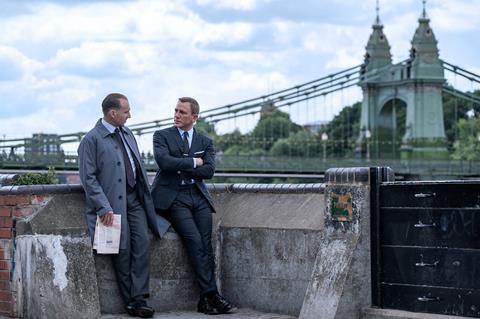 No Time To Die scored an estimated £4.5m-£5m ($6.2m-$6.8m) UK and Ireland opening day on Thursday (September 30), according to Universal Pictures International.

Combined with South Korea and Mexico the superspy saga that marks Daniel Craig’s fifth and final outing as James Bond has amassed an early running total of more than $7m.

The UK and Ireland opening day debut is approximately 13% above that of Spectre (Monday opening) and around 26% behind Skyfall’s Friday bow. No Time To Die is getting the widest theatrical release of all time in the UK in 772 cinemas – 25 more than previous record-holder Star Wars: The Rise Of Skywalker – and is also Universal’s widest UK release.

Executives at the company, which handles the international release while UA Releasing will open the film in the US on October 8, said said more than 30,000 people attended midnight screenings. They added that the film has generated 1.62m advance ticket sales for the opening four days, surpassing Spectre’s total advance bookings by more than 12% and performing in line with Skyfall at the same time pre-release.

The 25th entry in Eon and MGM’s franchise has also set record advance sales for Everyman, Picturehouse and Curzon.

In South Korea, the film has produced more than $1.2m so far comprising $665,000 from Wednesday afternoon shows in 2,167 screens for the biggest Culture Day opening for an MPA film for the year to date and a further $590,000 on Thursday.

A strong first preview day ranking number one in Mexico delivered $300,000 from 2,625 screens and 64% market share. Studio executives said Bond grossed almost seven times as much as the second-placed film and noted “strong attendance across the country”.

No Time To Die also opened in Brazil, Germany, Italy and Netherlands on Thursday and arrives in France on October 6, Russia on October 7, China on October 29 and Australia on November 11.