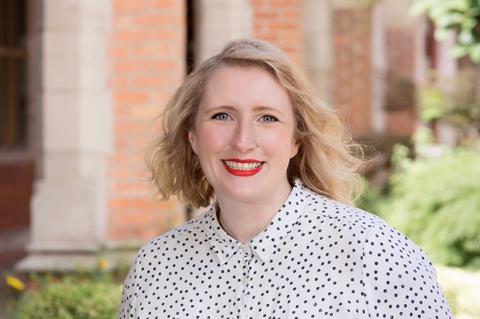 Northern Ireland-based filmmaker Aislinn Clarke, the writer-director of horror title The Devil’s Doorway, has been unveiled as the recipient of the second Academy Gold Fellowship for Women grant.

The award is part of AMPAS’ Action: The Academy Women’s Initiative, which launched in 2018 to support emerging female filmmakers. Sponsored by Swarovski, it gives winners a £20,000 bursary, as well as a year-long mentorship scheme from the Academy.

US filmmaker Eliana Pipes has also received a Gold grant. As part of the scheme, the academy organised lunch events with female filmmakers in both New York (today, Oct 2) and London (Fri 4). The US event included an onstage conversation with writer-director Greta Gerwig and producer Amy Pascal, moderated by actress Laura Dern.

“Working in the film industry is hard for everyone,” Clarke told Screen. “Being working class, a single parent, and a bit older than some winners, shows me that all the hard work is worth it, and that people believe in me.”

Clarke began making films after graduating with a BA and a Master’s in Film from Queen’s University in Belfast. She then put her filmmaking ambitions on the back-burner to raise her child, working instead in the TV industry, documentaries and producing.

Clarke said she intended to use her award, in part, to spend more time working on film in Los Angeles.

“I had my son when I was 17. It was not a good time in Northern Ireland,” she explained “I lived in a village where there was often evacuations [due to the political Troubles]. There was lots of tumult in my life. But I am tenacious. It would have been really easy to leave school early but I stuck at it. I’m really stubborn. I just wouldn’t give up.”

As a writer-director, Clarke is now working with US producer Marianne Maddelena on a thriller about a custody battle, called Slow Burn. Early development is being funded by Northern Ireland Screen.

“As a director I’m also attached to Cunning Folk [written by Adam Neville and produced by Imaginarium] which is seeking finance with a view to shooting next summer,” she added “It’s a folk horror, set around a neighbour dispute. The project attracted me because of its fresh take on the folk horror sub genre, as well as its intelligent handling of the themes of masculinity and restrictive gender roles for men. I had to put the script down and walk away from it several times. It’s terrifying and wonderful and I can’t wait to bring it to life.”

Last year, the UK award went to the London-based multihyphenate Ethosheia Hylton, whose short film Brixton Rock is subsequently being developed as a feature by BBC Films.

Hylton began her career as an actor. The award has allowed her to focus on directing.

“It has given me a chance to focus on myself as a filmmaker, coming from shorts. It’s given me a chance to focus on where I’ve had weaknesses and to spend time writing,” she told Screen. “I didn’t go to film school. I’ve since met a lot of producers. I’ve now got an agent [Casarotto], and it has given the feature film version of Brixton Rock a big push. It’s going to be made by the BBC.”

Based on the novel by Alex Wheatle, Brixton Rock focuses on the challenges of children in the care system in Britain in the 1980s.

Hylton is also working on a feature project called Sunita, and OPPS, a film looking at the UK knife crime epidemic. She is also developing a UK/Jamaican series looking at the Jamaican experience in the UK, since the 1950s.

Sunita tells the story of a black girl forced to endure a stuffy British boarding school. Joan Iyiola and Chibundu Onuzo are the writers and producers of the film, which was a winner of the Bumble Female Filmmaker Force programme.

Hylton said there is a long way to go, both in terms of what’s seen on screen and also behind the scenes, in terms of diversity.

“It is changing. There is still a glass ceiling. I think it’s dangerous not to see yourself on screen,” she said. “If you don’t have knowledge of yourself, it affects different parts of your life. I watched TV growing up but didn’t see myself reflected. There were black characters but they were often negative. You can see more in American entertainment but it’s not the British experience. There are so many stories to tell.”