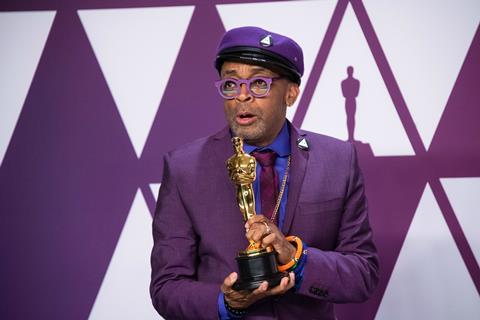 Oscar winner Spike Lee is the centre of post-show attention following a testy reaction to his acceptance speech by US president Donald Trump, and his own reported dismay over Green Book’s best picture win.

Accepting the first competitive Oscar of his career at the Dolby Theatre on Sunday (24) for best adapted screenplay for BlacKkKlansman (which he shared with Charlie Wachtel, David Rabinowitz and Kevin Willmott), Lee rounded out a proud summary of his own and African American history when he addressed the upcoming 2020 presidential elections.

“Before the world tonight, I give praise for our ancestors who helped build this country and […] today along with the genocide of its native people. If we all connect with our ancestors, we will have love, wisdom, we will regain our humanity,” Lee said. “It will be a powerful moment. The 2020 presidential election is around the corner. Let’s all mobilise. Let’s all be on the right side of history. Make the moral choice between love versus hate. Let’s do the right thing! You know I had to get that in there!”

Trump responded on Twitter by saying, “Be nice if Spike Lee could read his notes, or better yet not have to use notes at all, when doing his racist hit on your President, who has done more for African Americans (Criminal Justice Reform, Lowest Unemployment numbers in History, Tax Cuts,etc.) than almost any other Pres!”

At the climax of the ceremony, Lee reportedly left his seat and appeared to head to the exit when Green Book was declared winner of the top Oscar. He subsequently returned to his seat.

Backstage sipping champagne, the filmmaker did not give a clear account of his reaction to Green Book’s win, smiling and telling press, “No I thought I was courthouse at the Garden – the ref made a bad call,” referring to basketball team New York Knicks’ home arena Madison Square Garden.