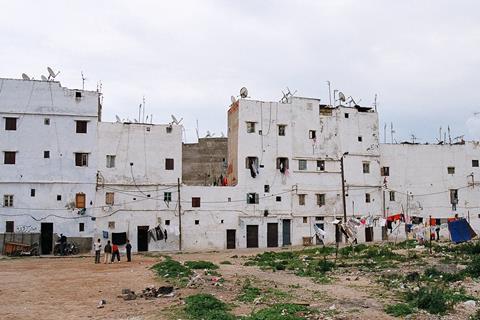 Upcoming films by Palestinian filmmaking duo Tarzan and Arab Nasser, award-winning Cambodian director Kavich Neang and Iraqi filmmaker Shawkat Armin Korki were among the 39 projects that have been granted support by the Doha Film Institute as part of its spring 2020 funding round.

Three-quarters of the selected projects are from the Middle East and Africa.

The Nasser brothers won support for their fiction feature Gaza My Love (previously announced as Apollo) which is in post-production. It revolves around a fisherman who is emboldened to court a market stallholder he has long admired from afar after he catches an ancient phallic statue in his nets.

Further feature narrative projects in the selection include award-winning Iraqi filmmaker Korki’s drama The Exam, about two sisters who cheat on a college entrance test to avoid an arranged marriage, and Moroccan director Kamal Lazraq’s Casablanca-set drama Hounds, about a father and son who agree to undertake an abduction in a bid to get out of poverty.

There is also a posthumous grant for the last project of the award-winning French-Moroccan filmmaker Dalila Ennadre who died at the age of 53-years-old after a long illness in Paris in May. She was working on post-production for her documentary Jean Genet, Our Father Of Flowers, exploring the late French writer’s life and legacy in the Moroccan city of Tangiers, which the DFI is supporting with a grant. She was among 18 female recipients in the latest round.

Further documentary grant recipients include The Last Hillbilly – by French filmmakers Diane Bouzgarrou and Thomas Jenkoe – which was among nine titles selected for the special 2020 label of the Cannes parallel ACID section this year, which it created in the absence of a physical event due to the Covid-19 pandemic. It follows the lives of a disenfranchised white rural community based in the Appalachian Mountains, east of Kentucky.

The selection also features projects from Colombia, Haiti, Bangladesh, Tanzania for the first time this year as well as the first ever VR short project grantee in the shape of Razan AlSalah’s The Greatest Wait (After the Last Sky), in which a third generation Palestinian refugee visits her family’s ancestral home of Haifa through virtual reality.

Six projects by Qatar-based filmmakers also won support, including short film A Proposal by Nadia Alkhater, about a young man seeking permission to marry his non-Qatari fiancé, and Meriem Mesraoua’s childhood tale Under Her Skin, about a young girl who has been ordered by her mother to stop biting her nails.

“Over the last nine years, the Doha Film Institute’s Grants Programme has supported powerful stories and moving storytelling across a broad spectrum of issues and perspectives and has evolved into a key initiative for the next generation of filmmakers from the Arab world and beyond,”  said DFI CEO Fatma Hassan Alremaihi.

“The programme echoes our core mission to amplify important voices of our time and help talent realise their creative aspirations, to develop and support world cinema while fostering cultural diversity.”

· Gaza My Love (France, Germany, Portugal, Palestine, Qatar) by Tarzan Nasser and Arab Nasser details how the discovery of an ancient Greek statue at the bottom of the Gaza sea disrupts the life of an old fisherman—challenging him to approach the woman he secretly loves.

· The Gravedigger (Somalia, France, Germany, Qatar) by Khadar Ahmed tells the story of Guled and his family who must summon the strength to stay together during difficult times.

· My Dad Is Not Dead (Morocco, Qatar) by Adil El Fadili follows Malik, a young boy who finds himself alone after the abduction of his father by the police and is determined to find his father.

· The Exam (Iraq, Germany, Qatar) by Shawkat Amin Korki tells the story of Rojin and her sister Shilan, who cheat on a college admissions exam to avoid a forced marriage.

· Amparo (Colombia, Sweden, Germany, Qatar) by Simon Mesa Soto is about a single mother that struggles to keep her family together in 1990s Colombia after her son is drafted by the army.

· Freda (Haiti, Benin, France, Qatar) by Gessica Fabiola Geneus is a compassionate story of a Haitian family within the context of the socio-political crisis in Haiti.

· Ghosts (Turkey, Qatar) by Azra Deniz Okyay follows four characters from very different walks of life, who are thrust together through a web of drug trafficking in the ghettos of Istanbul.

· Rehana Maryam Noor (Bangladesh, Singapore, Qatar) by Abdullah Mohammad Saad is about a stubborn medical professor, who embarks on an extraordinary journey to seek justice for her student, young daughter and perhaps, for herself.

· In White Building (Cambodia, France, China, Qatar) by Kavich Neang, Samnang faces the demolition of his lifelong home in Phnom Penh coupled with pressures from family, friends and neighbours.

· Our Choices (Syria, France, Qatar) by Salah Al Ashkar follows the director, as witness and protagonist of an impossible revolution in Aleppo.

· Jean Genet, Our Father of Flowers (Morocco, France, Qatar) by Dalila Ennadre is a dialogue between the living and the dead—an invitation to hold these worlds together, between deaf humanist revolt and poetic elegy.

· Speedboats (Italy, France, Qatar) by Yuri Ancarani depicts the story of an alternative society under the canals and palaces of the Venetian lagoon.

· The Last Hillbilly (France, Qatar) by Diane Bouzgarrou and Thomas Jenkoe is a portrait of a “hillbilly” family told through the words of one of their own.

· Aleph (Croatia, US, Qatar) by Iva Radivojevic is a travelogue of experience to find that place of connection, clarity, understanding across language, geography and experience.

· In Hounds (Morocco, France, Belgium, Qatar) by Kamal Lazraq, a father and son struggle to survive from day to day in the working-class suburbs of Casablanca - until one night they are asked to carry out an abduction.

· In the House of My Father (Morocco, Belgium, Qatar) by Rachida El Garani is the story of a Moroccan-Belgian family seen through the lens of their oldest daughter.

· Land of Women (Egypt, Denmark, Qatar) by Nada Riyadh is about a group of teenagers from a conservative village in the south of Egypt, that rebel against the traditional roles forced upon them.

· In The Curious Mr. Daoud (Algeria, Qatar) by Sid Ahmed Semiane, writer Kamel Daoud’s camera, installed in his quiet home, records his innermost thoughts while the country is in turmoil—amid the revolutionary Hirak Movement.

· Set in the summer of 1958, Night in a Glass of Water (Lebanon, France, Qatar) by Carlos Chahine follows a six-year-old boy who is abandoned by his mother.

· In The Storms (Algeria, France, Qatar) by Dania Reymond-Boughenou, supernatural events begin to multiply around Samir—a print news reporter who is covering the phenomenon.

· The Nablus Runner (Algeria, Palestine, France, Switzerland, Qatar) by Haïcha Ladrouz retells how, despite imposed restrictions on movement, a passionate long-distance runner strives to complete a marathon in one of the smallest territories in the world.

· A Proposal (Qatar) by Nadia Alkhater is about a young Qatari man seeking approval from a council in order to marry his foreign fiancé.

· Body and Soul (Qatar) by Ala’a Hamash recounts a journey in search of the true meaning of serenity.

· Revenge Knows Nothing (Qatar) by Abdulla Al Janahi and Abdulaziz Khashabi combines two stories on the horrific effects of human injustice on its victims—human or otherwise.

· In Smile You Deserve It (Qatar) by Ibrahim Albuainain, two farmers face distinct challenges and despite their contrasting tools and capabilities, a genuine smile makes all the difference.

· The Day Vladimir Died (Lebanon, Germany, Qatar) by Fadi Syriani follows Vladimir, an old Beirut resident, who leads a morbid life until he finds himself searching for his own obituary one day.

· In The Key (working title) (Palestine, France, Germany, Qatar) by Rakan Mayasi, the ominous sound of a key is haunting young Edina at night - but then the entire family starts experiencing the same nightmare.

· In The Last Displaced (Iraq, Qatar) by Muhannad Al Sudany, a soldier in Mosul tries to engage with a sniper who wants to take her infant from him.

· In Under Her Skin (Qatar, Algeria, France) by Meriem Mesraoua, Sarah must abide by rules she does not fully understand when her mother forbids her from biting her nails.

· Shadows (Jordan, Qatar) by Rand Beiruty is about a 14-year old runaway mother who fights the lurking shadows that attempt to steal the only dream that will set her free.

· Oddity Tales from a Strange Land (Jordan, Algeria, Lebanon, Egypt, Palestine, Qatar) by Ahmad Samara is a collection of stories on the diverse ancient historical tales and mythologies spread throughout the Arab world.

· The Closet Sessions (Jordan, Qatar) by Ahmad Satti Ibrahim is a music web series that documents and showcases the diversity of the music scene in Jordan and the wider Arab region.

In five-minute episodes, Zyara - Season Five (Lebanon, Qatar) by Muriel Aboulrouss, manages to engrave parts of its subjects’ souls, some of their stories and most of all—their emotions.