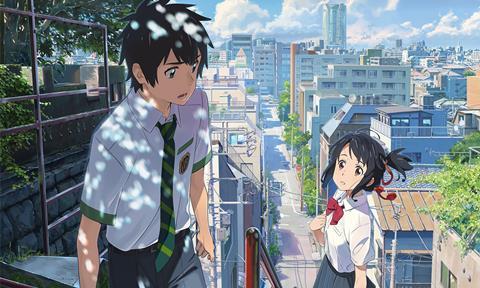 Paramount Pictures and Bad Robot have won the rights to adapt the Japanese animation hit Your Name into a live-action feature.

The companies will work with the 2016 film’s producer Toho, which will handle distribution in Japan.

Makoto Shinkai’s original tells of a teenage boy and girl from different backgrounds who discover they can swap bodies and race to find a way to meet and avert a disaster.

J.J. Abrams and Lindsey Weber will serve as producers for Bad Robot alongside original producer Genki Kawamura, producer of the original film. Eric Heisserer, the screenwriter who earned an Oscar nod this year for Arrival, will adapt the screenplay.

Your Name ranks as the highest grossing anime at the worldwide box office on $355.3m. It held on to number one in Japan for 12 weeks and is the biggest Japanese hit in Japan.

“We are excited to collaborate with an extremely talented team in Hollywood and to create with them a live-action version of the iconic Japanese film Your Name,” Toho CEO Yoshishige Shimatani said.

“Just like in the film it feels like a dream,” Kawamura said. “Mr. Abrams and his team have captivated audiences in their masterful reinvention of known properties.

“And Mitsuha and Taki have found a perfect narrator, Mr. Heisserer, to tell their sci-fi infused love story, which gave the film such drive. The meetings so far have been creatively stimulating with fantastic ideas that no doubt will make for a great movie. I am greatly honoured to work with these incredible creators in bringing to audiences the Hollywood live action version of Your Name.”

Shinkai added, “Your Name is a film created with the innate imaginations of a Japanese team and put together in a domestic medium. When such a work is imbued with Hollywood filmmaking, we may see new possibilities that we had been completely unaware of — I am looking forward to the live-action film with excited anticipation.”