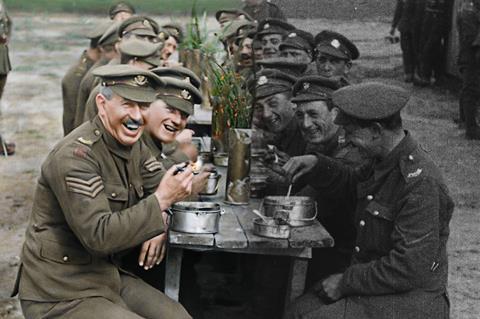 ’They Shall Not Grow Old’

Alongside its premiere on October 16 at BFI Southbank, Trafalgar Releasing and BFI LFF have confirmed that the film will be simultaneously screened in 2D and 3D across the UK.

Director Jackson will also take part in a post-screening Q&A with critic Mark Kermode, which will also be simulcast.

The project was co-commissioned by 14-18 NOW, the UK’s arts programme for the First World War centenary, and Imperial War Museum to mark the centenary of the conflict. It uses original footage from Imperial War Museums’ film archive (with audio from BBC archives) that has colourised and converted to 3D.

The full LFF programme will be announced on Thursday 30 August 2018.

Peter Jackson said: “I wanted to reach through the fog of time and pull these men into the modern world, so they can regain their humanity once more - rather than be seen only as Charlie Chaplin-type figures in the vintage archive film. By using our computing power to erase the technical limitations of 100 year cinema, we can see and hear the Great War as they experienced it.”

Tricia Tuttle, BFI London Film Festival Artistic Director said: “The work his team have done on the materials, adding colour and converting to 3D, is painstaking and beautiful. It makes these people from 100 years ago seem so alive and gives an uncanny sense the footage was shot recently.”