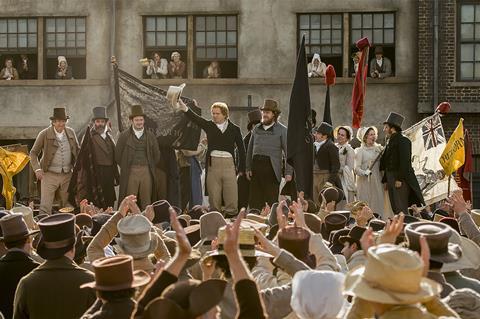 The BFI London Film Festival (LFF, 10-21 October) has announced its first ever premiere outside of London.

The festival will hold the UK premiere of Mike leigh’s Peterloo at HOME in Manchester on Wednesday 17 October.

It will feature a Q&A and be simulcast to cinemas around the UK, with Leigh and members of the cast set to attend. It will also screen in London on Friday 19 October.

The film tells the story of the 1819 Peterloo Massacre, where a pro-democracy rally at St Peter’s Field in Manchester was brutally supressed by the British army.

Distributed by Entertainment One (eOne) in the UK, Peterloo will have its world premiere in Venice, and stars Rory Kinnear, Maxine Peake, Neil Bell, Philip Jackson, Vincent Franklin, Karl Johnson and Tim McInnerny.

Amazon Studios is co-financier and US distributor, with additional finance coming from Film4, the BFI and Lipsync. Cornerstone Films is handling international sales and distribution.

The full Festival programme will be announced on Thursday 30 August.