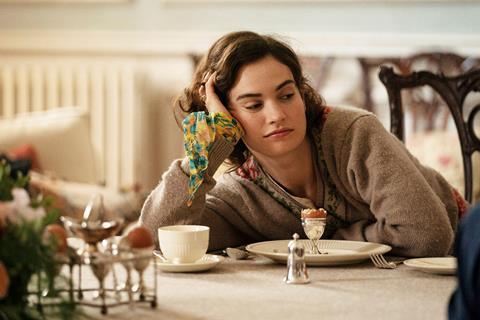 ‘The Pursuit Of Love’

The Rome Film Fest (14-24 October) has announced that a film version of Emily Mortimer’s The Pursuit Of Love is the first title in its 2021 selection.

Originally a three-part series led by Lily James, Dominic West, Andrew Scott and Mortimer herself, it will be re-edited as a feature film.

The project is based on the novel by Nancy Mitford and first aired on BBC One in the UK. It was produced by Moonage Pictures and Open Book for the BBC, with Amazon co-producing and taking streaming rights for various territories. Screen understands there are no plans for a theatrical or streaming release of the film version in Italy.

Tim Burton and Quentin Tarantino will also receive lifetime achievement awards at the festival, and as is customary will take part in an on-stage Close Encounters masterclass with festival director Antonio Monda. The talks will focus on Italian cinema and its influence on their films.

Another Close Encounters masterclass will be dedicated to American novelist Zadie Smith, who was supposed to participate in Rome last year but couldn’t due to Covid-19-related health reasons. A retrospective on American director Arthur Penn was also announced.

The festival is currently set to go ahead as a physical event. Last year’s edition was mainly in-person with red carpet restrictions, screening capacity caps and some guests appearing remotely.

Monda told Screen that having had a physical edition in 2020 was a big boost for 2021, as it gave confidence to distributors and talents. Thomas Vinterberg and Steve McQueen were among the guests that came to Rome and presented their movies in 2020.

Monda added that online masterclasses could be here to stay. “We’re talking with a very important talent that will participate in a masterclass but he doesn’t know yet if he will have to be on set during our dates,” he said. “If that will be the case we’ve agreed to do the masterclass online. This is something that would’ve never happened two years ago.”

The festival has also confirmed it will have a €4m budget for the coming edition, more than the €3.5m of 2020 but less 2019’s €4.5m, “Definitely less than other major European festivals”, said Laura Delli Colli, president of the Cinema per Roma Foundation that manages the event. “Yet we’re still able to attract talents and have a strong direction with films also with this budget.”