A budding film sound producer who lived through the Rwandan genocide is among this year’s BAFTA Scholarship recipients. 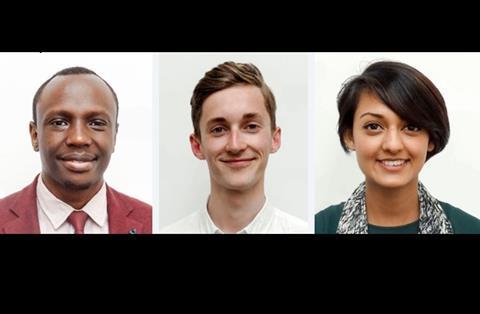 Hosea Ntaborwa is one of 16 students to receive a Prince William Scholarship in Film, Television and Games, supported by BAFTA and Warner Bros.

The 29-year-old was born in Rwanda and lived through the genocide of 1994, before moving to the UK aged 16. He graduated from the University of West London in 2009 with a Music Technology Specialist degree and currently works as a sales advisor in a clothing shop.

Ntaborwa said: “There are not enough words I can use to express the way I feel about being awarded a Prince William Scholarship, but let me try: I’ve heard the famous catchphrase “dreams come true” on numerous occasions, but it has never resonated with me until now.

“The scholarship is going to assist me in turning my dreams into reality and my future has never looked brighter than this. I have faced many obstacles in my life and being awarded this scholarship means funding won’t become one of them.

“I would love to use this opportunity to thank BAFTA and Warner Bros. for their great support and for allowing someone like me to dream even bigger.”

As well as receiving financial support of up to £10,000, the winners - who might otherwise have struggled to fund their studies - will also receive one-to-one mentoring by BAFTA members and award-winners in their fields.

Other recipients include Christopher Schlechte-Bond, from Cheshire, awarded £9,700 to complete the MComp in Composition for Screen at the Royal College of Music in London. The 22-year-old previously studied Music at King’s College London and gives private lessons in piano and composition to support his studies.

Shivani Shah, from Leicester, is awarded £10,000 to continue her studies for the MA Digital Effects at the National Film and Television School (NFTS). The 22-year-old previously studied Cinema and Photography at Leeds University.

Tom Barnes, from Reading, is awarded £4,200 towards the MComp in Composition for Screen at the Royal College of Music in  London. Aged 22, Barnes has a degree in International History from LSE (The London School of Economics and Political Science). He is also a freelance composer and Musical Director.

Adam Barnett, from Newcastle, is awarded £10,000 to complete the MA Cinematography course at the National Film and Television School (NFTS). The 24-year-old previously studied at the Northern Film School at Leeds Metropolitan University (now Leeds Beckett University). Adam’s previous roles include working as a stills photographer for VICE News UK.

Jurell Carter, 23, from Leicester, is awarded £3,700 to support him whilst studying for a BA (hons) in Acting at Liverpool Institute for Performing Arts (LIPA).

Laura-Beth Cowley, from Dorset, is awarded £5,300 to study the MA Animation at the University of the West of England. Laura, 24, has a degree in Animation and Illustration from the Cambridge School of Art (Anglia Ruskin University). She currently freelances as an animator and writer.

Jason Harris, 25, from Wolverhampton, is awarded £6,000 to support him whilst he completes his BA Acting at East 15, London.

Kyle Horwood, from Swindon, is awarded £5,100 to study for the MProf in Computer Games Development at Abertay University, Dundee. Kyle, who is 24, studied Computer Games Modelling and Animation at the University of Derby and now works freelance for a video game tutorial website.

Jonny Lavelle, 28, from County Durham, is awarded £3,060 towards the MA in Acting at the Guildhall School of Music and Drama in London.

Benjamin Luff, 22, from Newcastle-upon-Tyne, is awarded £5,100 to study for the MProf in Computer Games Development at Abertay University.

Daniel Seager, 24, from Kent, is awarded £9,500 to study an MA 3D Computer Animation at Bournemouth University.

Matilda Ibini, from Hackney in London, who was named a Prince William Scholar in 2014, will receive a further £4,500 to complete an MA Creative Writing (Playwriting and Screenwriting) at City University in London.

Bradley Johnson, from Norwich in Norfolk, will receive a further £2,000 to complete his MA Moving Image and Sound at Norwich University of the Arts (NUA).

Elizabeth Mercuri, from Chesterfield in Derbyshire, who was named a Prince William Scholar in 2014, will receive a further £3,100 to complete the MSc Games Software Development at Sheffield Hallam University.