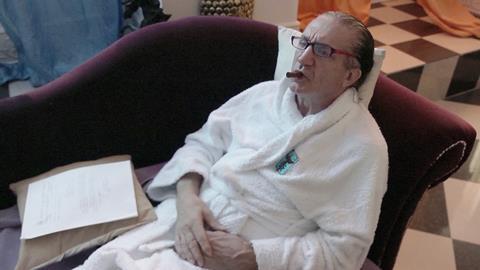 Gianfranco Rosi’s Sacro GRA, the first documentary to ever win the Golden Lion in Venice, has been chosen as the title to mark Doc Alliance Films’ first foray into triple day-and-date releases.

Speaking exclusively to ScreenDaily at this week’s Visions du Réel in Nyon, Doc Alliance Films’ Andrea Pruchová revealed that this coming Monday (May 5), the 2013 Venice winner will simultaneously be shown in six Czech and Slovak cinemas from Prague to Bratislava, at the Doc Alliance online portal DAFilms.com, and on the Film Europe TV channel.

The gala premiere in Prague’s Cinema Světozor will be attended by Rosi in person, with other special events being organised in the other cinemas.

Meanwhile, those watching the film via the DAFilms.com online portal will be able to decide how much they want to pay for the privilege - from nothing at all  to a symbolical or traditional payment. This donation model - ¨What is the price of the Golden Lion?¨ - is being tried out for the first time by Doc Alliance with this film.

As a bonus, the portal will offer a free retrospective available worldwide of Rosi’s previous films, from his 1993 debut Boatman through Below Sea Level (2008) about an American community living outside of the bounds of civilisation to 2010’s El Sicario. Room 164 about the life of a Mexican mass murderer.

In addition, the interactive photo application My Highway has been launched inviting cinema-goers to send in photographs of their  road journeys, with the best pictures being displayed in the six cinemas on the May 5 premiere.

Producers on the Move competing for Doc Alliance Selection Award 2014

Seven documentaries have been nominated by the seven members of Doc Alliance for this year’s Doc Alliance Selection Award to be presented during the Cannes Film Festival.

They include Carlo Zoratti’s The Special Need, co-produced by Germany’s Producer on the Move Henning Kamm, Jihlava 2013 Grand Prix winner The Great Night, produced by the Czech Producer on Move Tomás Hrubý, and  the Italian film collective’s Striplife about life in the Gaza strip, which had its international premiere at Nyon’s Visions du Réel this week in État d’Esprit.

The complete line-up of nomnations from the seven key European documentary film festivals is:

The Quest of the Schooner Creoula
dir: André Valentim Almeida - nominated by DOCLISBOA

Launched in 2008, the Award consists of the films selected by the Doc Alliance platform’s members for its travelling programme, with each festival then nominating a film expert to become a member of the jury deciding on the winner of the Doc Alliance Selection Award.

Previous winners included the Portuguese film Captivity, the Danish tragicomic portrait The Will and the documentary sitcom The Good Life. 2014 will be the second year that the Doc Alliance Selection Award is being presented in Cannes.

London-based Open City Docs’ MyStreet initiative is to be brought to the Czech Republic this summer by Doc Alliance Films which works from Prague.

¨The idea is to begin in a local way and this could become a European project in future years,¨ Doc Alliance Films’ Andrea Pruchová told Screen Daily.,

As with the UK project, anyone living in the Czech Republic will be invited to make films up to 10 minutes in length about who they are, where and how they live, creating a living archive of everyday life.

“Our version will be slightly different from the British concept  in that people can send their films in to the Czech website of MyStreet Films, or they can submit a script which we would select as one of seven projects to be made with the advice of seven leading Czech documentary directors,” Pruchová explained.

The film-makers who have committed to serve as mentors include directors Filip Remunda, Bohdan Bláhovec, and Ivo Matej as well as video artists.

¨We will have a blog where the participants can write in if they have any technical queries or suggestions for developing the script,¨ she added. ¨People can use their mobile phones or cameras to make their films, and the call for projects begins in mid-May and goes on until September.¨

The films will then be shown in the streets during the annual street festival in Prague at the end of September/beginning of October. The director of the winning film will be invited to attend the Open City Docs festival in London in 2015 and to participate in the international documentary film festival in the Czech Republic’s Jihlava at the end of October.