Ursula Meier’s Sister and documentary More Than Honey were the big winners at this year’s Swiss Film Awards. 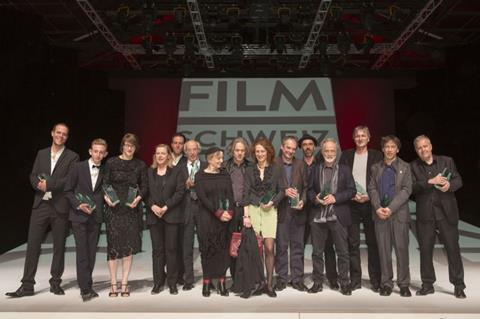 Sister is set at a Swiss ski resort and centres on a boy who supports his sister by stealing from wealthy guests. The film premiered at the 2012 Berlinale where it received a Silver Bear and is handled internationally by Memento Films.

At the awards ceremony in Geneva on Saturday evening, Swiss documentaries were particularly successful.

Best Documentary went to Markus Imhoof’s More Than Honey, which also won Best Film Score for Peter Schererhas. The film, which examines honeybee colonies around the world, has recorded more than 200,000 admissions in Swiss cinemas.

This year’s Honorary Award was presented to documentary film-maker Jacqueline Veuve who was prevented by ill-health from accepting the distinction in person, but was represented by her husband Leopold.

The evening’s favourite, Marcel Gisler’s Rosie, which had received six nominations, took home only one Quartz for actress Sibylle Brunner who had played the title role.

Awards season continues in Germany where the nominations for this year’s German Film Awards, popularly known as the Lolas, were revealed at the weekend ahead of the ceremony in Berlin’s Friedrichstadtpalast on April 26.

Big budget epic Cloud Atlas by Tom Tykwer and the Wachowski’s led the field with a total of nine nominations including for Feature Film and Best Direction.

As with Roland Emmerich’s Anonymous last year, the majority of Cloud Atlas’ nominations are in seven technical categories - from Best Cinematography through Best Musical Score to Best Costume Design.

Some observers have again raised the question of the place of English-language productions in the German Film Awards which, they argue, should celebrate the achievements of German cinema.

Oh Boy, which has been seen by over 230,000 cinema-goers in Germany, is also enjoying considerable success on the international festival circuit – most recently in Sofia where it received the Grand Prix – and is now beginning its theatrical release outside of Germany..

The Lola for the Best Children’s Film will be a two-horse race between Cyrill Boss and Philipp Steinert’s Das Haus der Krokodile and Leo Khasin’s Kaddisch für einen Freund.

The production companies who have films nominated in the three categories of Best Feature Film, Best Documentary and Best Children’s Film, can already consider themselves winners as State Minister for Culture and Media Bernd Neumann has paid out €2.05m in nomination premiums to these titles.

The six films nominated as Best Feature Film received €250,000 each to be invested by the producers in future film projects, while the three nominated documentaries each took home €100,000 and the two children’s films €125,000.

Moreover, this year will see an Audience Award being presented again for the first time since 2005 by readers of the listings magazine TV Spielfilm voting for their favourite from the 12 most successful German films of 2012, ranging from the top local production Türkisch für Anfänger through Hanni & Nanni 2 to Koköwääh 2 at www.tvspielfilm.de/Publikumspreis until April 22.

Minister Neumann used the occasion of the nomination event to add his voice to the chorus of concern about German public broadcasters ARD and ZDF’s future commitments to the domestic film industry.

“The channels have a distinct cultural obligation and thus an explicit responsibility to contribute to the safeguarding of German and European film production,” Neumann declared.

“It is therefore not acceptable that some channels are cutting their financial contributions and are in some cases withdrawing completely from production. German film productions should have the best slots in the schedules just as major sports events do.”

Neumann’s comments follow the establishment last week of new lobbying group “DI – Die Independents” which has been launched to draw attention to the negative effects for the local film industry of ARD and ZDF’s film acquisition and programming policies.

In a first communiqué, the Independents noted that the broadcasters’ self-imposed focus on ratings meant they no longer considered such highly decorated and Oscar-winning films as The Artist, Midnight In Paris or Habemus Papam as being suitable for the prime-time schedules.

The consequence was that “the cultural diversity of the German film landscape and the range of films on offer in Germany faces becoming impoverished.”