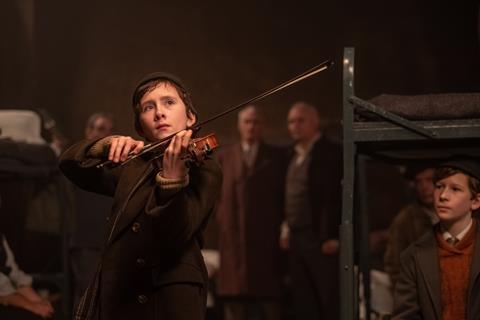 SPC has picked up US rights from worldwide sales agent HanWay Films to The Song Of Names starring Tim Roth and Clive Owen.

François Girard (The Red Violin) directed from a screenplay by Oscar nominee Jeffrey Caine (The Constant Gardener) based on the novel by music scholar Norman Lebrecht.

The Song Of Names is described as “an emotional detective story spread over two continents and half a century, culminating in the titular Song. The film shows that within the darkest of mysteries sometimes only music has the power to illuminate the truth, heal and redeem.”

“This is my sixth collaboration with Michael Barker and Tom Bernard,” said Lantos. “They are the champions of quality cinema and the perfect partners for our film.”

Sony Pictures Classics said, “The Song Of Names is one of those emotionally rich stories that defies description. Filial love surviving the jaws of history by way of the spiritual magic of music. François Girard is the perfect director here, expanding what he achieved with his classic ‘The Red Violin’. This movie promises to be one of producer Robert Lantos’ finest. It is a pleasure to be working with him again and our friends at HanWay and Ingenious. Audiences are sure to embrace this one at year’s end.”

HanWay Films MD Gabrielle Stewart said, “The Song Of Names is a collaboration between so much talent with at its core extraordinary and powerful music. We look forward to partnering with SPC and launching a true piece of Cinema.”

Girard added, “I am thrilled to be working with Sony Classics. Our film couldn’t be in better hands than Michael Barker and Tom Bernard.”

The Song Of Names is a Serendipity Point Films, Lyla Films and Feel Films production in association with Ingenious Media and Proton Cinema. It is produced with the participation of Telefilm Canada, SODEC, Bell Media, CBC, CMF and Ontario Creates.