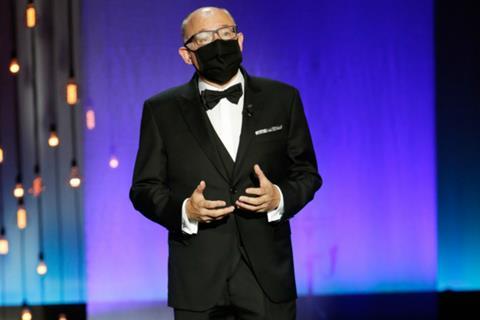 As in Venice earlier this month, face coverings and social distancing rules were required by everyone attending the opening gala and the red carpet was reserved exclusively to press photographers and TV cameras rather than the usual local crowds.

The Covid-19 pandemic means far fewer international names are attending the festival this year and the streets of the picturesque Basque town are much quieter than usual during festival time. The festival is showing 65 fewer films than last year, with the occupancy rate in screening theatres running at between 40% to 60%, depending on the venue.

Rifkin’s Festival star Gina Gershon was in town from the US for opening night, while Woody Allen sent a video message recorded from New York’s Central Park.

Other filmmakers confirmed to attend the festival include Matt Dillon, who has directed the Cuban music documentary The Great Fellove, Johnny Depp, who has produced another music doc, Julien Temple’s Crock Of Gold, A Few Rounds With Shane MacGowan, and Viggo Mortensen with his directorial debut, the drama Falling.

The main purpose of the festival, to show and promote films and support the industry, was underlined repeatedly at the opening ceremony. “Film theatres are still the best place to see films,” said festival director José Luis Rebordinos, before welcoming Cannes’ Thierry Frémaux to join him on the stage of the Kursaal theatre.

Seventeen films that received the Fremaux’s Cannes Official Selection 2020 label are screening at San Sebastian. They include the competition titles Passion Simple by Danielle Arbid, Sutmose by Sarünas Bartas, True Mothers by Naomi Kawase, Summer of 85 by François Ozon, and Drunk by Thomas Vinterberg.

Additionally, Fernando Trueba’s Forgotten We’ll Be is closing the official selection, out of competition and Mortensen’s Falling is also screening out of competition as part of the homage to the actor-director who is receiving the honorary Donostia award.

Frémaux welcomed the chance to be in San Sebastian in Spanish, apologising that he feared his Spanish was not good enough. He recalled that whenever he talks with Pedro Almodóvar “every five minutes he tells me: we can switch to English if you want”. He  then proceeded to proclaim the importance of theatrical exhibition, pointing out 2020 marks the 125th anniversary of the birth of cinema: “The Lumière brothers invented the cinematographer and also the film theatre and theatres are important not only for our history but also for our future. Cinema will never die.”

The audience applauded, masked, with an empty seat separating each guest, the same rule that applies to all screenings and that both press, industry professionals and the San Sebastián audience (considering the fact that this is a festival with a traditional strong bond with the city) are getting used to at the start of this edition.