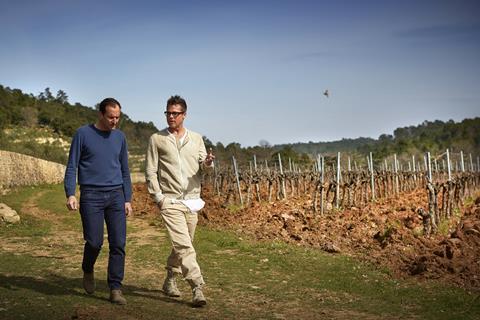 Brad Pitt in his vineyard with wine-maker Marc Perrin

UK independent outfit Swipe Films is to handle world sales on Sparkling: The Story Of Champagne, a feature documentary that will include Stephen Fry and leading names from the world of fine wine.

The film marks the directorial debut of Irish producer and Swipe Films managing director Frank Mannion, and is in post-production. The first footage will be shown to buyers at the European Film Market (EFM) in March, with the feature set to be completed in time for Cannes. Talks are underway with an agency to co-represent in the US.

The documentary will include contributions from actor Stephen Fry and a cast from the world of champagne including Taittinger heiress Vitalie Taittinger, Bruno Paillard, Oz Clarke, best-selling authors Don and Petie Kladstrup, Cristal wine-maker Jean-Baptiste Lecaillon, and Nicholas Soames, Conservative party MP and grandson of Winston Churchill, who allegedly consumed more than 40,000 bottles of Pol Roger in his lifetime.

The film was shot on location in France, England and New York. “We were fortunate to be able to shoot during lockdown as champagne producers were classified as essential workers,” said Mannion.