'Tarzan' beats 'The Purge', 'The BFG' at US box office 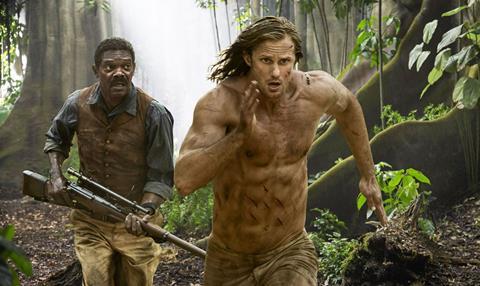 Pixar’s Finding Dory took $41.4m at the North American box office over the first three days of the Independence Day holiday weekend, while Warner Bros’ The Legend of Tarzan opened with a decent $38.5m and Universal’s The Purge: Election Year with a strong $31.4m.

Dropping by a modest 43% in its third weekend, Buena Vista-distributed Finding Dory took its domestic total to $371.8m, pushing it past predecessor Finding Nemo and making it Pixar’s second biggest domestic performer ever, now less than $50m behind Toy Story 3. Adding the estimated gross for the Monday holiday puts Finding Dory on $50.2m for the four-day weekend, and a running total of $380.5m.

The Legend of Tarzan, produced by Warner with Village Roadshow, exceeded gloomy pre-weekend predictions with its $38.5m opening (from 3,561 theatres, for an average of $10,813). Th estimated four-day take was $45.6m. But the David Yates-directed adventure, in which Alexander Skarsgard’s title character returns to Africa to foil a European plot to enslave the diamond-rich Congo, will still have to show staying power if it is to recoup its reported $180m budget.

The Purge: Election Year beat predictions with its $31.4m (from 2,796 theatres, for a $11,230 average) for the three-day weekend and an estimated $34.8m four-day take. The R-rated horror-thriller – made, like the two earlier Purgefilms, by Blumhouse Productions and written and directed by James DeMonaco – cost only $10m to make and topped the debut of 2014 predecessor The Purge: Anarchy, which opened with $30m on its was to an eventual $72m domestic take.

The weekend’s third new wide release, Disney’s The BFG, opened with $18.6m (from 3,357 theatres, for a $5,527average) and an estimated $22.3m for the four-day weekend. Produced with Walden Media, the effects-heavy family fantasy about a friendly giant and a little orphan girl got good reviews and had plenty of name recognition - Steven Spielberg directs from a script based on Roald Dahl’s belovedbook - but still underperformed, given its reported $140m budget.

After its second-place opening last weekend, Fox’s Independence Day: Resurgence was down nearly 60% this weekend to $16.6m, for a domestic total so far of $72.7m. The film’s $20.2m four-day estimate takes the total to $76.4m.

Aggregate box office for the top 12 films in North America edged up 0.1% from last weekend to $181.1m, 40% up on the comparable session in 2015, when holdovers Inside Out and Jurassic World were making it hard for new releases to get a look in.