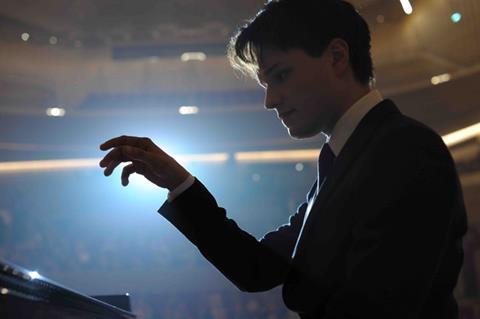 TF1 Studio has announced first sales on French director Ludovic Bernard’s drama In Your Hands starring Jules Benchetrit as a talented young pianist, with a tearaway streak, struggling to fulfil his full potential.

TF1 Studio film team, led by Sabine Chemaly, kicked off sales on the production at the AFM last November.

Screen can also reveal a first look of Benchetrit in the lead role of Mathieu, a troublemaker from a poor background with a special talent for the piano.

Lambert Wilson co-stars as a music school director, who is captivated by Mathieu’s playing on a public piano in a train station in Paris and decides to help him, alongside Kristin Scott Thomas as a tough teacher known as “The Countess” who is given the task of preparing the boy for a prestigious competition.

Benchetrit, who is the son of director Samuel Benchetrit and the late actress Marie Trintignant, made his Cannes debut in 2015 in his father’s film Macadam Stories, playing opposite Isabelle Huppert as teenager who befriends a jaded film star.

In Your Hands is the third feature from director Bernard after feel-good, comedy adventure tale The Climb and romantic comedy Mission Pays Basque.

Swiss-French cinematographer Thomas Hardmeier, whose credits include The Young and Prodigious T.S. Spivet and Yves Saint Laurent, is also attached to the production.

Eric Juherian and Mathias Rubin at Paris-based Récifilms are lead producing the feature which is due for delivery in the second half of 2018.

The sales announcement comes on the eve of Unifrance’s Rendez-vous with French Cinema running Jan 18-22.

Billed as the biggest market for French films outside of Cannes, 40 sales companies will be in attendance at the event screening some 80 new French films.

Screening titles on TF1 Studio’s Rendez-vous slate include Christian Clavier and Catherine Frot starrer Momo, which has drawn more than 500,000 viewers in its first three weeks on release by Mars Films in France, and Emmanuel Finkiel’s Memoir of Pain, inspired by writer Marguerite Duras’s experiences during World War Two, which premiered at San Sebastian. Les Films du Losange releases the latter in France on January 24.