UPDATED OCTOBER 12: Fox’s The Martian dominated the international marketplace again this weekend, with a confirmed $57.5m from 77 markets. Warner’s Pan went wide internationally and took an estimated $20.5m from 54 markets. 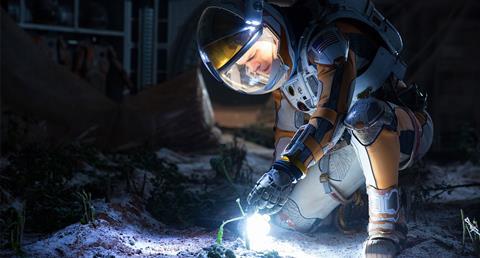 UPDATE: In its second weekend on international release, The Martian landed in three more major markets and ended up with $57.5m from 12,859 screens in 77 territories, pushing its international total to $118.5m.

The space adventure’s $12.5m debut from 1,132 screens in South Korea was Fox’s biggest ever opening weekend in the territory and beat the local industry record for October.

In Russia, the estimated take of $7.5m from 2,246 screens put the film at the top of the local chart and was twice as big as the opening for Gravity in the market.

In Germany, the film opened in second place with $4.1m from 811 screens, a bigger debut than both Gravity and Interstellar.

Maze Runner: The Scorch Trials took another $15.1m from 5,555 screens in 73 markets this weekend. A number one opening in France with an estimated $9m lifted the young adult book adaptation’s international total to $167.9m.

UPDATE: Expanding into Europe after starting in Latin America and Southeast Asia, Hotel Transylvania 2 took a confirmed $23m in its third weekend from nearly 6,396 screens in 59 territories, for an international total of $91.3m with 50% of the marketplace still to be reached.

In Italy, the animated sequel opened top with a confirmed $3.7m from 537 screens, 29% ahead of the original Hotel Transylvania and twice as big as the opening of Rio 2.

In France, just ahead of school holidays, Hotel T2 took $3.2m (including previews) from 594 screens, on a par with the original film.

The film also opened in Hong Kong, Taiwan and three other Asian markets, grossing a total of $1.7m (including previews) in the region.

UPDATE: Pan added 52 markets this weekend and grossed a confirmed $20.4m from more than 11,000 screens in 54 territories. Having opened in just over 40% of the marketplace, the film’s international tally is now $25.2m.

European markets generated roughly $7m, with the film opening at number two in Russia with $2m from 1,908 screens and in the same spot in Spain with $1.7m from 349. The opening in Germany produced an estimated $713,000 (including previews) from 725.

Asia produced roughly $6.1m for the weekend, with the film opening top in Thailand with $1m from 350.

The Intern grossed an estimated $15.2m from 62 markets, for an international total so far of $58.2m.

Arriving in its final international market, Inside Out opened in China with an estimated six-day gross of $11.7m, making it the top western release for the weekend and Pixar’s biggest ever non-sequel opener in the territory. The debut contributed to an overall international weekend take of $21.6m from 21 markets, for a running international total of $464.4m.

The animated comedy was off only 15% in Germany, holding on to top spot in the local chart and reaching a local total to date of $13.8m. In its fourth weekend in Italy, the film reached a total of $25.2m and surpassed Frozen as the highest grossing Disney or Pixar animated release of the past decade.

Ant-Man, which has now opened in every market except China, increased its international total to date to $232m.

UPDATE: Everest, from Universal, Working Title, Cross Creek and Walden Media, grossed an estimated $8.3m in 65 territories this weekend, for an international total of $119.3m.

The Visit grossed an estimated $2.5m in 26 territories for an international total of $22.1m.

Illumination Entertainment’s Minions, now released in all territories, grossed an estimated $1.8m in 43 territories this weekend and raised its international total to $817.2m.

Regression stayed at number one in Spain, where Universal is distributing, with an estimated $2.3m at 330 dates for a local total of $6.3m.

Jurassic World took an estimated $300,000 in eight territories this weekend, raising its international total to $1.014bn.

The drug war drama opened with an estimated $2.4m (including previews) from 434 screens in the UK and $1m from 285 screens in France. Germany and Australia have generated $2m after two weekends and $3.1m after three, respectively.

Legend took an estimated $1m this weekend in the UK and Ireland, according to distributor Studiocanal, for a running total in the market of $25.8m.

For Macbeth, Studiocanal reported a weekend estimate of $776,988 in the UK and Ireland, bringing the film’s running total to $2.9m.