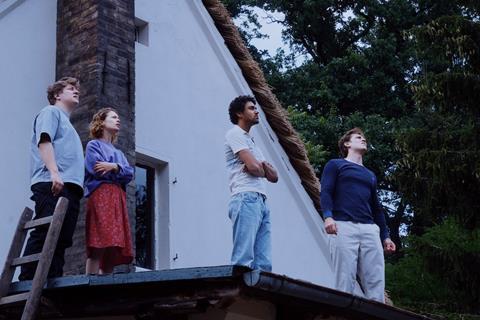 The Match Factory has finalised a seven-strong slate of titles playing at the 2023 Berlinale, on which it represents world sales rights.

The company’s lineup includes four titles in Berlin Competition, including German director Christian Petzold’s latest film Afire, about a group of friends in a holiday home by the Baltic Sea where emotions run high as the parched forest around them catches fire.

Also in Competition is Margarethe von Trotta’s Ingeborg Bachmann – Journey Into The Desert, which sees Vicky Krieps star as the eponymous Austrian poet as she embarks on a passionate relationship with playwright Max Frisch.

Emily Atef is uniting with the sales firm again on an adaptation of Daniela Krien’s novel Someday We’ll Tell Each Other Everything, first announced by Screen last year. Set in a warm summer in 1990 in former East Germany, it follows a young woman who begins a relationship with a charismatic farmer who is twice her age. Marlene Burow and Felix Kramer lead the cast of the Row Pictures production.

German filmmaker Christoph Hochhausler returns to the festival scene with Till The End Of The Night, the latest from director Christoph Hochhausler. The contemporary noir follows an undercover investigator infiltrating the world of a trans woman who has links to a major drug dealer – and with whom he was in love under her former identity. Another production from Germany’s Heimatfilm, it stars Timocin Ziegler and Thea Ehre; The Match Factory represents Hochhausler’s last three features.

The German sales powerhouse is also uniting with director Frauke Finsterwalder for the first time on Sisi & I, which screens in Panorama and depicts the second half of the life of Empress Elizabeth of Austria – known as ‘Sisi’. Recently played by Krieps in Corsage, here Sisi is played by Susanne Wolff, with Sandra Huller as her lady-in-waiting, Countess Irma. Sisi is living in an aristocratic women-only commune in Greece when countess Irma is sent there to be her companion and finds herself captivated by the eccentric and extravagant recluse. Germany’s Walker Worm Film produces the title.

The Match Factory slate is rounded out by two titles in the competitive Encounters section. The first sees Tatiana Huezo returning to her documentary roots with The Echo, the story of the remote village of El Echo where the children care for the sheep and their elders. The Match Factory also produced the title, alongside Mexico’s Radiola Films and ZDF; Huezo’s last film Prayers For The Stolen received a special jury mention on debut in Un Certain Regard at Cannes 2021.

Also in Encounters is Finnish director Tia Kouvo’s feature debut Family Time, a tragicomic study about a family that starts falling apart when they come together for the Christmas holidays. It is produced by Finland’s Aamu Film Company, the outfit behind Compartment No. 6.

The Match Factory will be selling all seven titles at this year’s European Film Market (February 16-22).