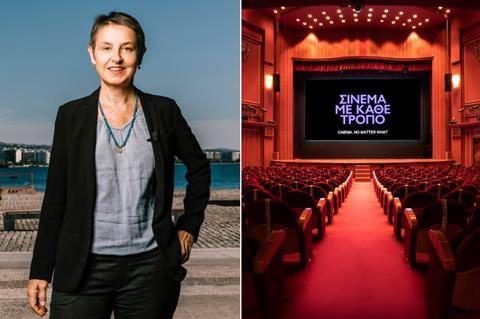 The awards celebrate outstanding achievements throughout the network of European arthouse theatres, which comprises 1,216 cinemas (3,131 screens) in 738 cities and 43 countries.

Jalladeau was honoured with the best programming award for her work at the Olympion and Warehouse 1 cinemas in Thessaloniki, Greece.

The iconic six-floor Olympion building and Warehouse 1, located in the city’s port, host TIFF every November. However, the festival was forced online this year as a result of a surge in Covid-19 cases.

The award recognised Jalladeau’s efforts to be innovative, offering a diverse programme, while facing challenges such as attracting younger audiences and connecting cinema with other art forms and social events.

In addition, the award for best young audience activities went to the Panora cinema in Malmö, Sweden; and the prize for entrepreneur of the year was handed to Ramiro Ledo Cordeiro, the former exhibitor of Cinema Numax in Santiago de Compostela, Spain, who now operates Cinema Duplex in Ferrol, Spain.

While a physical event could not take place to mark the awards, Europa Cinemas has committed to staging a ceremony in each winning cinema when restrictions are eased.

Per Larsson was honoured for his youth work at Malmö’s three-screen Panora cinema, which opened in February 2015 and has established a programme for children that allows them to see previews, meet filmmaking talent and learn about cinema through creative workshops.

Entrepreneur winner Cordeiro is behind the one-screen Numax theatre, the only cinema in central Santiago de Compostela, situated in Spain’s Galicia region. In October 2019, he took over management of the two-screen Cine Duplux – the only theatre in Ferrol’s downtown - where he chose to programme independent films in their original version. Previously, the cinema only programmed major commercial releases in dubbed versions.