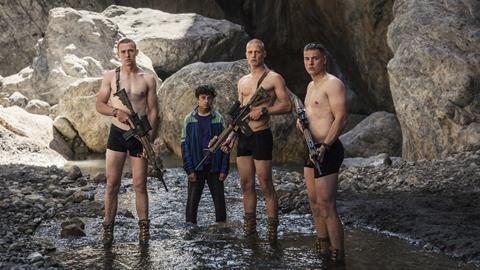 TrustNordisk has boarded international sales for Do Not Hesitate, directed by Venezuela-born director Shariff Korver.

The story follows a Dutch military convoy working on a peacekeeping mission in the Middle East. When three young soldiers guarding their vehicle on a desolate mountain road accidentally shoot and kill a goat, they don’t know if they can trust a 14-year-old goatherd following an ambush.

Described a suspenseful drama, the film is currently in production. Screen International can reveal the first image here.

TrustNordisk sales and project manager Silje Nikoline Glimsdal said: “When I first read the script for Do Not Hesitate, I immediately sensed that the story, along with its entire approach to the war-film genre, was very original.

”I truly believe that this intense and nerve-wrecking drama will pull the audience into a rabbit hole of paranoia and suspense and leave them contemplating the vast consequences of sending very young men to war.”

Producers are Erik Glijnis, Leontine Petit and Emily Morgan for Lemming Film, which has recently co-produced Monos, Zama and The Lobster.

Korver said: “With Do Not Hesitate, I want to make the audience smile, to move them and make them sit at the edge of their seat.”