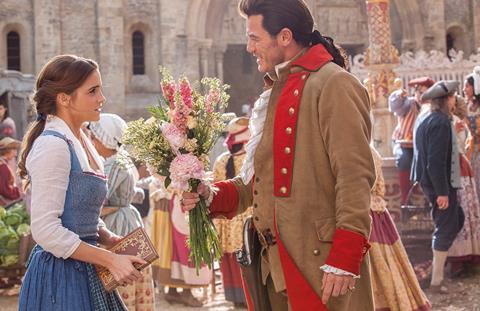 Beauty And The Beast has enjoyed a magical start to its UK box office run.

Disney’s latest live-action remake waltzed to a mighty $24.5m (£19.7m), marking the fifth biggest Fri-Sun opening of all time, behind Spectre’s $24.8m (£19.98m), and the eighth-biggest overall opening based on films that had preview-boosted openings.

Whatever way you look at it, Beauty And The Beast’s debut is remarkable and with strong reviews and word-of-mouth, it is anyone’s guess just how much it can take.

Also for Disney, Moana is set to sail past the £20m mark next weekend, a terrific achievement after its opening weekend take of only $2.75m (£2.21m).

Due to the monster arrival of Beauty And The Beast, Kong: Skull Island fell more than 50% (excluding previews) with a $3.34m (£2.69m) second weekend.

Get Out proved to be savvy counter-programming from Universal as it enjoyed a brilliant debut.

With strong word-of-mouth, the US box office smash will hope to follow Split’s sustained UK run to hit the £10m mark.

Logan has crossed the £20m mark in the UK after three weeks in play.

Lionsgate and Trafalgar Releasing’s critically acclaimed thriller is now up to $643,000 (£518,029), and will soon become the biggest non-Bollywood foreign language release this year, ahead of Toni Erdmann.

Personal Shopper was initially scheduled for an October 28, 2016 release through Metrodome before the distributor went into administration, with Icon picking up the film in October.

Asghar Farhadi’s The Salesman recorded his best-ever UK debut, with one site still to report.

From its one-site release at Bertha Dochouse in Curzon Bloomsbury, Arrow Films’ Gleason grossed $1,900 (£1,535), including previews.

Sony’s Life and Vertigo Releasing’s Another Mother’s Son both receive wide releases, while Park Circus’ The Eyes Of My Mother and Soda Pictures’ Age Of Shadows are among the films receiving a limited release.