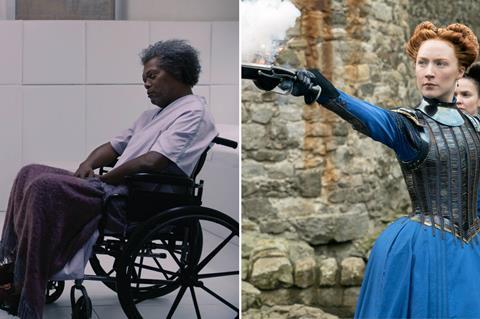 Disney’s Glass is a sequel to two of Shyamalan’s previous works – Unbreakable (£11.6m gross in the UK) and Split (£11.4m) – starring Bruce Willis and Samuel L. Jackson from the former, and James McAvoy from the latter in an unusual take on the superhero genre.

The director’s best-performing title in the UK remains The Sixth Sense, which built to £25.8m back in 1999. Despite less than stellar reviews, Disney will be hoping that Glass can surpass the takings set by Split, which opened with £2.6m, in 2017.

Universal’s Mary Queen Of Scots is the feature debut of theatre director Josie Rourke, and stars Saoirse Ronan as Mary Stuart and Margot Robbie as Queen Elizabeth I as two feuding cousins in 16th Century Britain.

The film is a Working Title production, and the company has an exemplary track record of box office hits in the UK. Recent successes include Johnny English Strikes Again, which took £17.6m last year, and Darkest Hour, which took £24.1m. Mary Queen Of Scots recently picked up three Bafta nominations, and further awards attention should be beneficial to takings.

Also opening in the UK this week is Studiocanal’s Beautiful Boy, starring Timothee Chalamet, Steve Carrell and Maura Tierney in the story of a father trying to help his drug addict son. The film is from Belgian director Felix van Groeningen and is an Amazon Studios production. It premiered at Toronto last year.

Key holdovers include eOne’s Stan & Ollie, which will look to build on a chart-topping £2.4m opening session, 20th Century Fox’s The Favourite, which posted an impressive 9% uptick in its second weekend, and Disney’s Mary Poppins Returns.