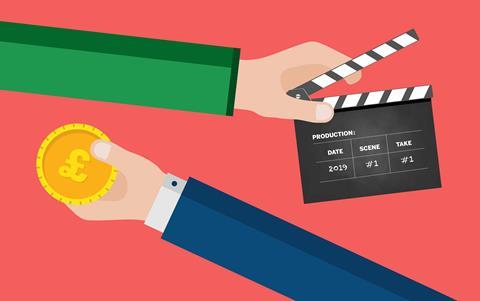 The amount paid out in UK high-end television tax relief (HETVF) is catching up with film tax relief (FTR), according to provisional figures published by HMRC, the UK government’s revenue and customs department.

Nonetheless, the amount of FTR paid out has still risen by more than 50% in the past five years.

785 claims, representing 740 films, were made during 2019-2020. Each film may make several claims during the production process, and one claim can also be made to cover several films.

So far 300 films completed in 2019-20 have claimed FTR, with UK expenditure of £2.5bn. This is expected to rise to around 450 films as more claims are received by HMRC.

FTR is available for British qualifying films: films must either pass a cultural test or be a qualifying co-production. At least 10% of the core production costs must relate to activities in the UK. Since 2015 a single rate of relief of 25% has applied to all films.

The 2019-2020 figures are provisional as companies have a year after the end of their accounting period to file their Corporation Tax return, and a further year to make, withdraw or amend a claim for FTR.

For high-end TV, the number of £2m-plus tax relief claims from high-end TV producers has doubled over the past two years, demonstrating that drama prices continue to rise.

These 40 claims accrued almost £200m – making up well more than half of the overall £324m that was paid out by the exchequer.

Responding to today’s figures, Stephen Bristow, who sits on the board at the Production Guild of Great Britain and is partner in the Film and TV team at accountants Saffery Champness, said: “These statistics are an important and timely reminder of the economic value of the creative industries. Film and High-end television (HETV) production spend has doubled in the past five years to reach more than £3.6bn in 2019. For every £1 investment by the government in FTR, £7.69 of GVA (gross added value) is generated and for HETV that figure is £6.10 of GVA for every £1 spent by the government.

“The film and television sector has a vital role to play in the recovery of the UK’s economy post Covid-19. The benefits of the production boom flow downstream to a multitude of other businesses and support functions – post-production houses, advertising, merchandising, hotel, travel and local transport and infrastructure in production locations – which all provide employment opportunities.”