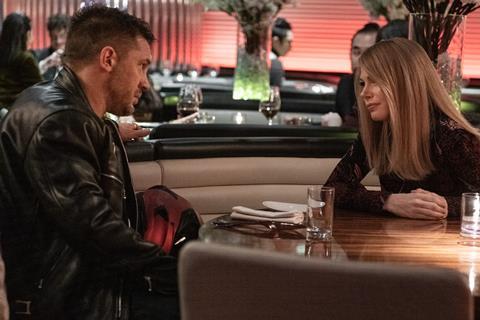 Tom Hardy and Michelle Williams in ‘Venom: Let There Be Carnage’

In further stirring box office news during the pandemic the exclusive theatrical release of Columbia Pictures’ Venom: Let There Be Carnage has crossed $100m on its fifth day of release in North America.

Disney/Marvel Studios’ Shangi-Chi And The Legend Of The Ten Rings also crossed $100m on its fifth day after it opened exclusively in cinemas on September 4.

On Friday UA Releasing will unleash the latest James Bond thriller No Time To Die in a highly anticipated exclusive theatrical launch. 007 has raced past $120m worldwide following an encouraging international launch last weekend that included more than $35m in the UK alone.

As cinemas continue to open up and audiences return under strict Covid protocols a panel of exhibition heads told CineEurope in Barcelona earlier this week that premium cinema-going experiences were critical for the ongoing recovery of the international box office.

“[I]t’s the films but it’s about the experience that we as exhibitors offer as well, and that premium experience is critical,” said Mark Way, managing director at Odeon Cinemas.