'War For The Planet Of The Apes' rules North America on $56.3m (update) 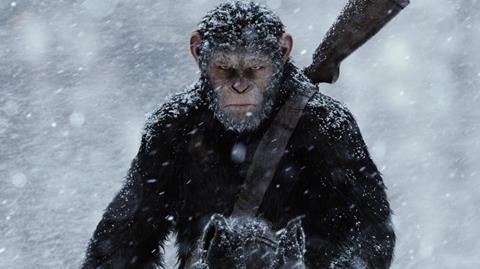 Fox’s War For The Planet Of The Apes dominated Spider-Man: Homecoming on its debut session to open top on a confirmed $56.3m.

Sony’s webslinger crossed $200m in its second session, while Amazon Studios’ The Big Sick surged three places through Lionsgate in its fourth session after expanding from 326 sites to 2,597. Broad Green’s horror Wish Upon flopped in seventh on $5.5m from 2,250 sites.

War For The Planet Of The Apes debuted in 4,022 theatres and while gross revenues were the lowest in the eight-year trilogy reboot in real terms, $56.3m allied to strong reviews bodes well for the summer run and could set the film up to be one of the more successful franchise sequels of a summer where, inevitably, several are falling by the wayside.

This week’s wide releases are: Christopher Nolan’s Dunkirk through Warner Bros; Luc Besson’s Valerian And The City Of A Thousand Planets through STX Entertainment; and Universal comedy Girls Night.