MAY 23 UPDATE: Disney’s Captain America: Civil War becomes the first film of 2016 to hit $1bn at the global box office. 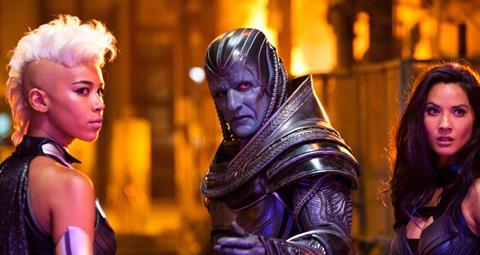 Overall, the UK led the way with a $10.6m chart-topping bow, followed by Fox’s second biggest ever opening in Mexico and Brazil with $8.8m and $6.3m, respectively.

Other highlights included the biggest X-Men opening in Russia with $6.3m and a $6.2m debut in France, despite transportation strikes this weekend. $5m of its overseas debut came from 246 IMAX screens in 57 markets.

The film took an estimated 41% of its overseas debut from 3D screens, withn the leading countries exhibiting in 3D including Brazil (79.4% in 3D), Germany (82%) and Hong Kong (60%). RealD equipped screens grossed $18.4m of the overall debut.

Based on current exchange rates, X-Men: Days Of Future Past delivered an opening weekend of $100m in the same markets. Two of the three biggest markets for DOFP have yet to open: China (June 3) and South Korea (May 25).

Following on from its record-breaking debut, The Wailing (Goksung) fell only 28% to retain the top spot in South Korea with $11.1m for a terrific $32.3m to date.

The Angry Birds Movie flew high at the global box office with $94m for an early $150m to date.

Overseas, the animated adaptation targeted an estimated $55.5m from its 83 markets for $112m after two weekends in play.

China posted an excellent $29.2m debut including the biggest opening day of 2016 for an imported animation, while the Netherlands and South Korea launched with $1.5m each.

Ahead of its release in the UK, Germany and Brazil, Money Monster generated $2.8m from its 16 markets for $9.2m so far.

Captain America: Civil War became the first film of 2016 to hit the $1bn mark at the global box office on Friday [May 20].

With $981.8m globally, Zootopia is now the fourth highest grossing animated release of all time.

UPDATE: The Divergent Series: Allegiant has crossed the $100m mark at the international box office.

Driven by a number three $9.9m debut in China, the latest instalment now stands at $104.1m to date overseas.

UPDATE: Opening in 10 more territories, Neighbors 2: Sorority Rising partied to a further $5.7m from its 45 territories for $29.6m to date.

The comedy sequel lands in Chile, Cyprus and Mexico next weekend.

The Witch scared up $2.1m from its eight territories for $10.6m overseas. The majority of the weekend came from a $1.4m bow in Mexico, while Germany charted sixth with $290k from 162 dates.

Ahead of the final theatrical release in Japan next weekend, The Huntsman: Winter’s War stands at $111.5m overseas and $158.3m worldwide.

Warcraft: The Beginning launches in 21 international territories next weekend, including Denmark, France, Germany, Russia, Indonesia and the Philippines.

Chinese-French co-production Night Peacock posted an estimated $3.9m in China, according to ComScore.

Batman v Superman: Dawn Of Justice and How To Be Single stand at $542m and $65m, respectively.