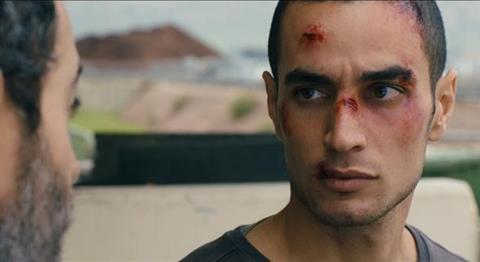 Probably the first fiction film to exclusively fly the Palestinian flag, the new film from Hany Abu Assad (who made Paradise Now) combines elements featured in previous films dealing with the Israeli-Palestinian conflict, but at least does a good job managing to put them in the right context. With a cast consisting almost entirely of young, new, inexperienced talents, Abu Assad delivers an effective, credible, drama for an international audience and should finds its way into worldwide distribution.

Abu Assad navigates confidently around the potholes, keeping the story tightly knit, and adding to the political aspects, as seen from the Palestinian side, the details required to establish a necessary background.

The story takes place in an Arab village split right down the middle by the notorious concrete wall built by Israel for security reasons. Omar (Adam Bakri) lives on one side of it, but his sweetheart, Nadja (Leem Lubany), who is still going to school, lives on the other side. Nadia’s older brother Tarek (Eyad Hourani) and their neighbor Amjad (Samer BIsharat), are Omar’s childhood friends, and the three of them attack an Israeli garrison close to the village.

They shoot an Israeli soldier and take flight, but a few days later, the Border Police break into Omar’s home and arrest him. He is thrown in jail, beaten up and severely tortured to reveal the identity of his friends, and when he refuses he is told he faces a life term in prison, unless he agrees to go back and lead the Israelis to the real culprits.

Desperate to see his girl again and to regain his freedom, he finally agrees. But as soon he meets again with Tarek and Amjad, they understand they have to eliminate the informer among them, agreeing that there must be one otherwise Omar wouldn’t have been apprehended in the first place.

The grain of mistrust has been planted and the conflict between the former friends builds up with every scene, as each one suspects all the others. Israeli interference only accrues the crisis separating them, with Amjad’s attempt to steal Nadja away from Omar throwing an additional spanner into the works.

After a certain point the plot starts to get entangled in its own twists, some of which are predictable, others a bit farfetched, but Abu Assad navigates confidently around the potholes, keeping the story tightly knit, and adding to the political aspects, as seen from the Palestinian side, the details required to establish a necessary background.

Adam Bakri has a strong camera presence and Leem Lubany’s expressive eyes often deliver messages beyond the dialogue, while Waleed F. Zuaiter, the only experienced actor in the cast (also one of the film’s producers) manages to lend the sinister Israeli agent Rami an almost human quality. Israelis may very well claim that procedures, uniforms and security forces conduct is inaccurate, Palestinians may not like the reference to so many informants in their midst, but if both sides complain, it is probable Abu Assad did something right.