War drama to be submitted for the Best Foreign-Language Film category. 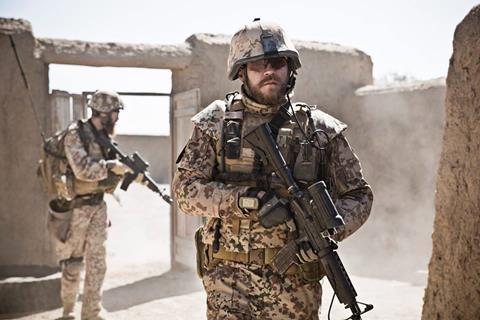 Denmark has selected Tobias Lindholm’s A War as its entry to the Best Foreign-Language Film Category at the 88thAcademy Awards.

The feature, which premiered at this year’s Venice Film Festival in the Horizons competition, is the story of a Danish military commander who is captured by the Taliban and accused of a war crime when he returns to Denmark.

The national selection commitee selected the film, which was released in Denmark on Sept 10 and is headed for festivals in Zurich and Reykjavik.

A War was picked from a shortlist of three which also included Anders Thomas Jensen’s Men & Chicken and Joshua Oppenheimer’s documentary The Look of Silence.

Henrik Bo Nielsen, CEO of the Danish Film Institute and chair of the committee, said the committee chose Lindholm’s drama as it believed the film “would have the greatest chance to seize the attention of the Academy members”.

“Lindholm has previously shown Oscar muscle as the scriptwriter behind Thomas Vinterberg’s ‘The Hunt’ which was one of the five Oscar-nominated films in 2014.

“With its captivating drama and the director’s unique take on the story, we consider A War a strong bid.”

Denmark last made the nominations for Best Foreign-Language Film in 2014 with Thomas Vinterberg’s The Hunt and won the category in 2011 with Susanne Bier’s In a Better World.

The Danish auteur reunites the star of his two previous films, Pilou Asbaek, and cast Danish soldiers who served in Afghanistan to round out the players.

Nordisk produces with support from DR and the Danish Film Institute.

Magnolia has acquired US rights, Nordisk will release across Scandinavia, and StudioCanal will distribute in France, Germany, UK, Australia and New Zealand.