Yuval Delshad’s debut centres on a a family of Iranian immigrants. 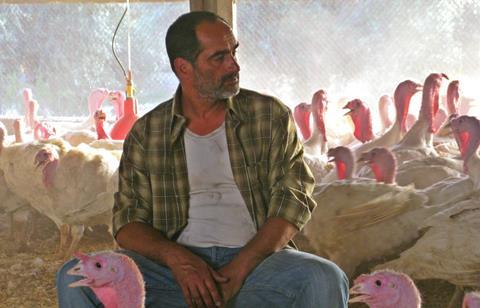 Fresh from its Toronto world premiere and still unreleased at home, Yuval Delshad’s debut feature, Baba Joon beat all the competition in sight to be crowned Israel’s best film of the year at the annual Israeli Film Academy Awards ceremony.

As such, it will represent Israel for next year’s Foreign Language Oscars.

Delshad’s Farsi-spoken drama portraying the conflicts inside a family of Iranian immigrants living off a turkey farm in the south of Israel picked up five Ophir awards, including best film, best music, best cinematography, production design and casting.

Significantly, all three of the film’s adult leads, including Navid Negabhan (Homeland) are non-Israeli Iranian actors living in the West.

The first, inspired by real life incidents, shows a city in panic after a terrorist attack, while the second follows two characters facing many of the country’s issues, each from his own personal perspective, the first going on his way up, the other on his way down the staircases crossing Mount Carmel in Haifa.

For United King Films - involved in the production of both Baba Joon and Wounded Land - the ceremony confirmed their position as the undisputed leaders not only of the Israeli cinema production, but of its distribution and exhibition as well.

If there was a loser, it was another United King Films, Hamilim HaTovot (The Kind Words), directed by Shemi Zarhin, nominated in no less than 12 different categories but left unrewarded.

Still, as the box office leader of the year, The Kind Words can certainly console itself with the massive audience approval, whatever the industry’s opinion.

The Best Documentary Award went to Mor Loushy’s Censored Voices which reveals for the first time intimate and candid conversations recorded in 1967 between writer Amos Oz and soldiers who fought in the Six Days War, footage that was censored ever since and made public only now.

Alon Garbuz, head of the Tel Aviv Cinematheque for the last 42 years, was awarded the Life Achievement distinction for his steadfast support of the Israeli cinema, which has always found under his auspices an open door to show its products, even at its most difficult times when it was shunned by the rest of the country’s cinemas.

The award comes only a few days before Garbuz is supposed to retire, though there is still no heir in sight to take over his job.

Culture and Sports Minister Miri Regev, unfazed by several oblique ironic remarks made in the course of the ceremony referring to her right wing policies, refrained from any immediate response to requests for increasing state support to film production.

Instead, expressing her satisfaction with the recent performance of Israeli cinema, she said she intends to create a special budget, to be allocated for its promotion abroad.