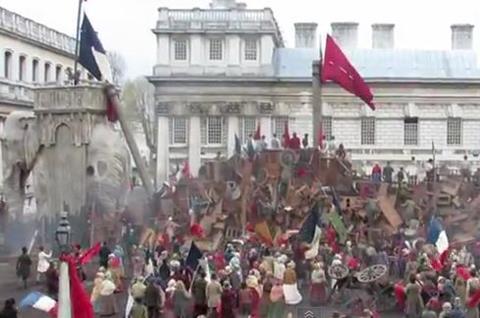 The two groups have been in discussion since the beginning of the year and BECTU - which comprises 26,000 members - hopes to have an agreement drawn up and ratified by PACT by the end of October.

While discussions have initially covered film employment, one BECTU official said the agreement could potentially extend to high-end TV drama and that in future there could be a number of similar agreements drawn up for individual TV genres.

“PACT is working hard to move the whole industry on this, including US studios,” said PACT CEO John McVay. “This is about getting back some clarity about the labour market and getting some structure for freelancers and employers.”

“There has been increasing militancy from some BECTU members in recent years,” he continued. “That creates a very unhelpful perception both domestically and internationally. We don’t want an unstable labour market. Stable and secure industrial relations are the most important factors in inward investment next to the dollar-pound rate.”

The push for reform comes amid a rising tide of unrest among UK crew, particularly from hair and makeup and location departments.

More than 100 hair and makeup artists joined BECTU during and soon after recent Working Title/Universal production Les Miserables starring Russell Crowe, increasing the number of hair and makeup professionals in the union “by 25% in the space of one month,” according to an official.

One experienced hair and makeup artist who worked on Les Miserables - which shot between March and May of this year - described conditions on the production as “the last straw”.

“There were a lot of issues on set and it wasn’t only from the hair and makeup department,” they told Screen. “The ethos of working long hours, breaking turnaround and being expected to drive long distances after working overtime meant that it became a safety issue. We constantly overran, and ran into our days off, and were expected not to be paid for it.”

“It would be great for everyone in the industry if PACT and BECTU can come up with an agreement so we know where the land lies. You do begin to call into question whether the extra pay on films compared to TV is really worth it,” the source continued.

BECTU officials were called to the set of Les Miserables to discuss conditions after crew were asked to work a six day week despite many being on five day contracts. After meeting with BECTU the production agreed to compensate crew for the extra day.

During the shoot the disgruntled hair and makeup team formed a Facebook group called Project Bushfire, which now includes more than 500 UK professionals working in film and TV. The group has held regular meetings since.

Hair and makeup artists aren’t the only department seeking change. Location managers are also banding together. 52 recently formed a BECTU branch and are discussing their grievances with the union.

One respected location manager told Screen that many colleagues are frustrated about the amount of ‘prep’ and ‘wrap’ time that is inadequately compensated.

“Our contracts usually stipulate 60 hours per week but we do far in excess of that. Our pay doesn’t go up steadily enough to take those extra hours on the chin. Since 2003 virtually no producers have referred to the Blue Book in a conscientious way…We feel ignored.”

The manager said that while contracts were often agreed verbally before shoot it was common for many crew not to see their contracts until weeks into production, rendering them powerless in the interim.

Electricians (‘sparks’) and construction workers are known to be more demanding when it comes to film employment contracts, and the recent action from other departments suggests they want a level playing field.

The UK film and TV industries have largely avoided strikes such as those that have taken place in the US in recent years, in part due to smaller craft unions.

Broadcast magazine’s Freelancer survey last week revealed an increasingly overworked freelance workforce in the TV sector, with 21% of respondents clocking up 60 hours or more per week and many complaining about six-day weeks and unpaid overtime.

TV industry employment disputes often centre around the BBC. In March of this year the BBC and Directors UK drew up a ‘Creative Rights’ document for directors working on BBC-in house productions.

BECTU has a membership of around 26,500 who work in broadcasting, film, theatre, entertainment, leisure and interactive media.