Production to get underway at West Ham’s former Upton Park stadium on August 8. 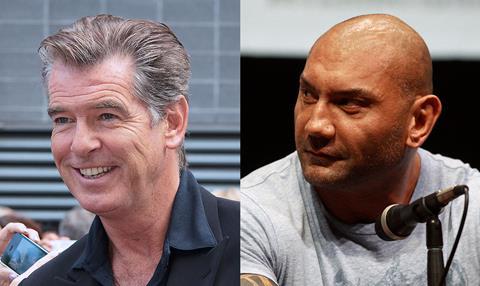 Pierce Brosnan will star alongside Dave Bautista in Scott Mann thriller Final Score, which is due to get underway in the UK at West Ham’s Upton Park stadium on August 8, 2016.

The Gersh Agency is co-representing US rights.

Written by The Brothers Lynch and Jonathan Frank, Final Score takes place at a major sporting event, during which the stadium is seized by a group of heavily armed criminals demanding ransom. An ex-soldier must use all his military skills to save the 35,000 capacity crowd, one of which is the daughter of his fallen comrade.

“Final Score may be set in London but truly it’s a story that’s relatable the world over,” said The Fyzz Facility’s Robert Jones.

“Scott Mann’s vision has scale, white knuckle tension, humor and heart. We’re thrilled that the concept and screenplay has attracted such an exciting cast in Dave Bautista, Pierce Brosnan and Julian Cheung, and firmly believe that this will be a standout in 2017’s movie release calendar.”

West Ham will be relocating to Olympic Stadium in East London next season. Following the Final Score shoot, the stadium will be handed over to a British property developer.

Former Bond star Brosnan is currently filming AMC’s new drama series The Son, based on the Philipp Meyer novel about the rise and fall of a Texas oil family. Last year, he starred in the soon-to-be released thriller I.T., produced by his production company, Irish DreamTime, alongside Voltage Pictures and Friendly Films.

Brosnan is represented by CAA, Bautista by The Gersh Agency, and Cheung by Raymond Man.