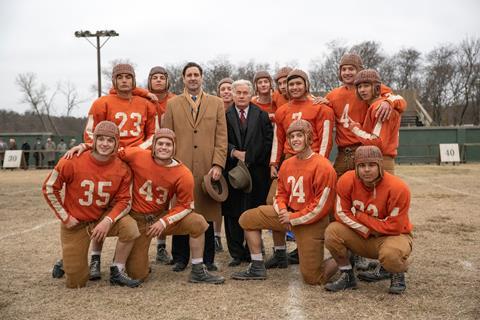 In 1938, a scrappy Texas high school football coach shocked the American sports world by guiding his team of under-sized, under-manned, orphaned players to the state championship, defeating more prestigious and athletic programmes along the way. 12 Mighty Orphans turns that true-life tale into an exceedingly predictable feel-good drama, draining the story of resonance. Luke Wilson and Martin Sheen are respectably earnest as the caretakers of these blandly noble underdogs, but this sepia-tinged portrait slavishly follows the playbook at every turn — which is ironic since it’s a film meant to honour a coach who won by being inventive.

Opening in Texas on June 11 before showing at Tribeca three days later and expanding across the US on the 18th, this Sony Pictures Classics release will appeal to those who crave inspirational stories that extol the virtues of believing in oneself. And at a time when professional football isn’t on television, 12 Mighty Orphans might be a welcome sight for fans, with Wilson and Sheen’s involvement attracting older crowds.

Based on sportswriter Jim Dent’s 2008 nonfiction book, 12 Mighty Orphans introduces us to Rusty Russell (Wilson), a successful football coach who moves his family to Fort Worth, where he plans to start up a team consisting of teenagers living at the local orphanage. With the help of a lovably crusty medic, Doc Hall (Sheen), Rusty will help these boys learn not just the fundamentals of the game but also that they have value — even if they think they’re worthless after being abandoned by their parents.

Director and co-writer Ty Roberts (The Iron Orchard) has forged an old-fashioned sports film, complete with the hard-nosed coach, the seemingly impossible odds facing his team — they barely have enough players to field a squad — and the improbable rise from laughing stocks to championship-caliber athletes, all in a two-hour runtime. To add to 12 Mighty Orphans’ musty approach, Doc provides a honeyed voiceover that explains the cultural context for this story — specifically, how the Great Depression created widespread financial anguish but, also, a societal hunger to embrace this plucky football team, who embodied America’s resiliency.

Wilson carries himself with a stiff righteousness as Rusty, who suffers from PTSD in the wake of World War I, not to mention the buried trauma of being an orphan himself. The actor’s self-effacing likability is nicely utilised as Rusty moulds these puny players into confident young men, but the character is no different than the thousands of cinematic coaches who came before. Likewise, Sheen tries to elevate a cliched role as an ageing drunk who serves as Rusty’s folksy right-hand man — but who will also, on cue, realise that he needs to put the flask down if he wants to be a better person.

Sports dramas have their sturdy pleasures, chief among them their ability to tell a familiar story but still get an audience invested in the outcome of the big game. But Roberts approaches the material with such drabness that even the genre’s reliable building blocks fail him. The montages of the team getting better, the scenes of the loathsome coaches of the rival clubs, and the lump-in-the-throat speeches meant to fire up the players all fall flat. (Similarly, Mark Orton’s manipulative score strains for stirring sentiment, never eliciting much of an emotional reaction.)

To be sure, the underlying material has intriguing elements. Rusty Russell is credited with inventing the spread offence, which remains a potent weapon for modern football teams, who maximise their players’ speed by forcing the defence to spread out across the field to cover them. Recognising that these orphans aren’t very big or naturally talented — save for Hardy Brown (Jake Austin Walker), a fast, powerful runner — Rusty concocts this ingenious offence to neutralise their opponents’ superior size and strength, and for a moment, 12 Mighty Orphans roars to life at the prospect of showing the viewer how sports strategy is born out of desperate necessity.

But soon 12 Mighty Orphans returns to its dutiful tone, which is surprising since, for a film that explores how orphans can feel like unloved second-class citizens, the actual orphan characters aren’t particularly well-drawn. Walker projects an edgy handsomeness, but Hardy isn’t necessarily more dynamic than his teammates — he’s just given more screen time. Roberts doesn’t even manage to capture the religious devotion that Texans have about football. It’s a game of blood, sweat and tears — but 12 Mighty Orphans never evokes anything so primal or passionate.

Screenplay: Ty Roberts & Lane Garrison and Kevin Meyer, based on the book by Jim Dent