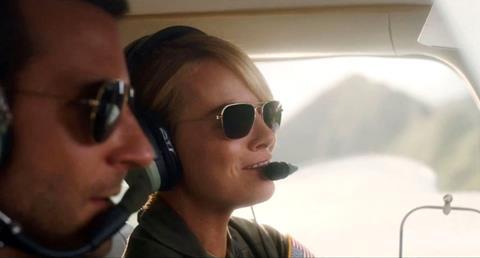 After a long and sometimes bumpy trip, Cameron Crowe’s Aloha finally arrives on screen as a forced and often cloying romantic comedy-drama with a strong, Bradley Cooper-led cast and an enticing Hawaiian setting but a bewildering mishmash of plot threads and themes. Though it has faint echoes of Crowe’s Jerry Maguire, this seriously muddled summer rom-com has none of the charm that made that 1996 hit film the writer-director’s commercial breakthrough.

Many of the story twists and plot devices are hard to swallow, but even at its most naturalistic the film leaves characters feeling half-formed and dramatic turns feeling half-explained.

The marquee names and Crowe’s reputation for smart mainstream movie-making could still attract a core baby boomer audience when Sony opens the film in the US on May 29. But given the bad advance buzz – especially former Sony film boss Amy Pascal’s leaked e-mail comments about an early cut – matching the $75.6m domestic take of Crowe’s 2011 We Bought A Zoo won’t be easy. International distributor Fox will have an even harder task (Zoo managed only $44.5m away from home) as Aloha rolls out over the remainder of the summer.

The first sign of the film’s troubled gestation – which reportedly included significant re-editing after test screenings – may be the brief introductory voiceover that tries to get audiences up to speed on Brian Gilcrest (Cooper, currently hot off American Sniper), a famous but recently disgraced military contractor eager to redeem himself on a supposedly simple job with the US space programme in Hawaii.

When he arrives in the islands, Gilcrest reconnects with past love Tracy (Rachel McAdams), now a wife and mother, and begins to fall for Allison (Emma Stone), an intense pilot assigned to be his Air Force handler.

While the love triangle plays out, the film goes off on tangents involving a Hawaiian independence group looking to protect local culture; the billionaire industrialist (played by a stubbly Bill Murray) who wants Gilcrest to help him launch a satellite from the islands; and a bizarre bit of space-war sci-fi. Dropped into the story are doses of Hawaiian mythology and folklore apparently intended to guide the characters to their true paths.

Many of the story twists and plot devices are hard to swallow, but even at its most naturalistic the film leaves characters feeling half-formed and dramatic turns feeling half-explained. And in pursuing the traditional rom-com victory of love over cynicism, Crowe seems to push his cast into a sort of amped-up cuteness that’s more annoying than appealing.

Cooper comes out with his charm largely intact, but Stone isn’t well served by the film’s tone and Murray is sorely underused. Other minor roles are played, to varying but mostly limited effect, by John Krasinksi, Danny McBride (from This Is The End) and Alec Baldwin.