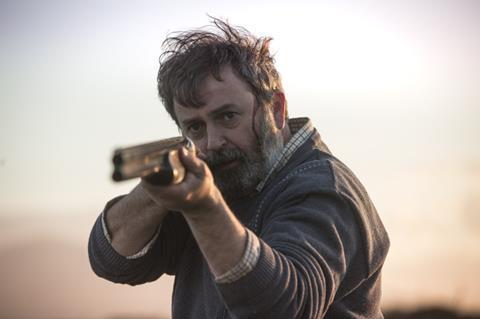 The first twenty minutes of Bad Day For The Cut could be a bleak social realist drama by Bruno Dumont or the Dardenne brothers as we follow the life of a middle-aged Irish farmer and his devotion to his elderly mother. It is only once the blood flows and the bodies start piling up that it begins to merit its Sundance Midnight slot and confidently venture into Jeremy Saulnier territory.

The result is an unusually soulful genre outing with an endearingly rumpled Nigel O’Neill as an ordinary man turned gun-totin’ vigilante. It is the naivety of O’Neill’s Donal and his blustering determination to do the right thing that makes him such an engaging character and allows the film to retain its grip even as aspects of the plotting remain resolutely conventional. There is enough investment in his quest and sufficient murder and mayhem along the way to satisfy thriller fans and give the film solid theatrical potential.

Looking like an unmade bed, the gentle, decent Donal has happily put his life on hold to care for his mother Florence (Stella McCusker). When she is murdered in the family home, it appears to be a case of being in the wrong place at the wrong time. Donal can only bury her and mourn her passing. It gradually becomes apparent that Florence was a more colourful character than her son ever realised and the whole film becomes about the sins of an earlier generation returning to haunt their offspring.

Donal has soon joined forces with young Polish man Bartosz (Józef Pawłowski) to follow a trail that leads to crime boss and sex trafficker Frankie (Susan Lynch) and a complex tale that explains why Florence “had a target on her back for years”.

The fatalistic tone of Bad Day works nicely against the grain of some of its more lurid scenes of torture and murder, maintaining a credibility to events that often don’t bear the closest of scrutiny. There is a sardonic humour and a lugubriousness to the film that seems entirely in keeping with the good-hearted Donal as he sticks to his mission no matter the threat to his life or the family revelations he encounters along the way.

Cinematographer Ryan Kernaghan emphasises the sense of isolation in rural Ireland from the vast muddy fields to the stretch of empty beach used in the finale. The pitch-dark nights and shadowy encounters with thuggish individuals all add to the film’s film noir feel.

Director Chris Baugh and co-writer Brendan Mullin are less successful in developing some of the female characters. Bartosz’s sister Kaja (Anna Próchniak) is little more than a damsel in distress and Susan Lynch is often reduced to thumping table tops and slamming shut phones in exaggerated exasperation at the incompetent henchmen who consistently fail to follow her orders. Lynch is suitably steely as the ruthless, foul-mouthed Frankie but there is a pantomime quality to the character that she is unable to escape.

Despite those reservations, Bad Day succeeds because of the quality of the craftsmanship, the decision to bring a more measured perspective to typical thriller conventions and the performance of Nigel O’Neill who makes a very human and flawed avenger.