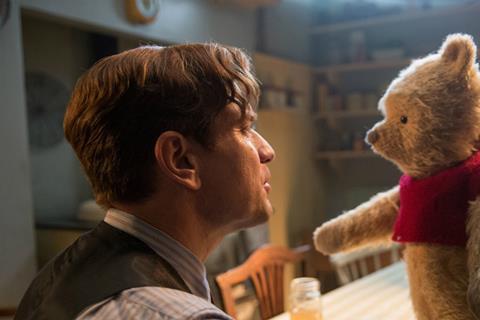 Every last honey drop of bumbling charm is extracted from Winnie-The-Pooh in this appealing live action outing for the bear of limited brains but a big heart, which stars Ewan McGregor as a grown-up, disheartened Christopher Robin. The enduring popularity of A.A. Milne’s British children’s books and of Disney’s aggressively cute spin off should ensure a warm reception for a movie which uses Pooh, Piglet and the gang to make a case for family time, workers rights and the joy of living in the moment.

The heffalump in the room during any discussion of the merits and commercial potential of Christopher Robin will be Paul King’s delightful Paddington films. And the differences between the two can be summed up by looking at the two bears’ sticky toast-toppings of choice. Paddington’s marmalade is sharper, more distinctive and challenging than Pooh’s soothing, gloopy honey. That said, the fact that Pooh’s adventures take place in a relatively safe space is unlikely to harm the film commercially and, given a vigorous marketing push from Disney, Christopher Robin will likely surpass the returns of the somewhat darker take on the Pooh legacy, last year’s bittersweet Goodbye Christopher Robin.

An impressive list of writing talent includes Alex Ross Perry (Listen Up Philip), Tom McCarthy (Spotlight) and Allison Schroeder (Hidden Figures) and results in some playful dialogue. ‘Boarding school’ becomes ‘boring school’ when filtered through Pooh’s cloth ears; ‘efficiency’ is misheard as ‘a fish in the sea’. But while the dialogue generates plenty of laughs, the writing stumbles in the plotting, which hits a few too many of the expected beats of the ‘workaholic husband rediscovers the joy of family’ genre.

Director Marc Forster is in comfortable territory here, having previously explored the periphery of children’s literature with 2004’s Finding Neverland. Post-war Britain is shot through gauzy rose-tinted smog; a scene involving a red balloon, a bear and a gorgeously-lit railway station is a thing of real beauty. Honey-based physical comedy and kitchen shelf pratfalls suggest that the filmmakers drew a certain amount of inspiration from Paddington’s antics. The film nods, too, to the various Disney animated incarnations of Winnie-The-Pooh – the ghost of the Pooh theme-tune drifts into the score at one point.

Of the human characters, McGregor is given the most to work with as a man who, shaped by the British public school system and scarred by his experiences in WWII, has lost touch with the child he once was.  And Hayley Atwell floods the character of Christopher’s wife Evelyn with warmth.

The film’s main triumph is the way that the toy characters are evoked. Button-eyed, quizzical and slightly moth-eaten, Pooh, Piglet, Tigger and Eeyore will strike a chord with British viewers of a certain age. The fact that we can see the fabric beneath the fur is a masterstroke: it makes Pooh and his pals more authentically loved, and loveable.