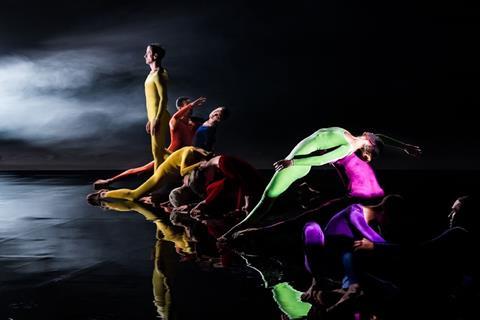 “We don’t interpret something; we do something,” declares modernist choreographer Merce Cunningham, his voice a constant presence in the documentary that bears his name. More than just a mantra the dance icon lived by, these words shape Alla Kovgan’s immersive and enthralling debut feature, which steadfastly avoids becoming a standard birth-to-death tribute. Eschewing talking heads and rote biographical details, the inventive piece instead showcases new recreations of Cunningham’s work — performed, in one of the film’s many perceptive choices, by the last generation of dancers from his ensemble.

A fluid and involving collage

If the correlation between his words and the movie’s approach wasn’t instantly apparent, Cunningham lets its subject restate his creed — and in a documentary of lesser style, skill and success, that would’ve played as overkill. This is such an engaging and absorbing picture, however, and so well-served by its 3D dance sequences, that a rare stint of repetition can’t dampen its spirit. A festival hit, as shown by berths in Toronto, New York, Hamburg, Zurich, London and more, this dynamic ode should easily pirouette to a healthy general release. That 2019 marks the centenary of Cunningham’s birth and a decade since his death should also assist.

As well as highlighting Cunningham’s choreography above all else, writer/director/editor Kovgan also narrows her gaze to the first 30 years of his career. Spanning 1942–72, the period cemented his groundbreaking genius and his standing as one of the masters of his chosen art form. Letting his work do the bulk of the talking doesn’t just make creative sense as a result — it’s perhaps the only strategy capable of doing his talent justice. As with Wim Wenders’ Pina, the movie this will earn the most comparisons with, breathtaking dance moves are far more spectacular to watch than discussions, recollections and analysis.

Working with Merce Cunningham Dance Company assistant director of choreography Jennifer Goggans, Kovgan stages these sequences in tunnels, rooftops, parks and more, adding to the film’s vibrant touches. Cinematographer Mko Malkhasyan’s rhythmic lensing also has the same pulsating impact, weaving through, around and above the performers — letting viewers feel like they’re part of the 14 revived pieces, and allowing them to appreciate each dance from a multitude of vantages. If one stands out, Cunningham-Andy Warhol-Jasper Johns collaboration Rainforest shines as brightly as anything involving floating silver pillows should. That said, choosing a favourite from the documentary’s dance scenes is akin to choosing a favourite child.

As entrancing as each piece proves solely as a work of art, Kovgan has more of Cunningham’s words to share, ape and honour. Via voice recordings, the audience hears more of the choreographer’s philosophies — his determination to ignore labels and styles, his daring to challenge the status quo and his desire to simply focus on human bodies doing what they do — then sees these ideas resonate in his work. Clips of performances during Cunningham’s chosen period provide further examples, taken from tours and rehearsals and accompanied by photos and letters. Like the rest of the film, this isn’t a routine assemblage of archival materials either, but a fluid and involving collage.

Along the way, the necessary contextual information still bursts to the fore; Cunningham doesn’t assume it’s only playing to already-acquainted viewers. His professional and romantic relationship with composer John Cage, and his work with designer Robert Rauschenberg, all form part of a rich and lively tapestry that revels in the art but doesn’t overlook the man behind it. Never making an obvious move, like its subject, the end result veers close to avant-garde. That’s a term that Cunningham himself famously and continually shunned; however Kovgan clearly doesn’t share the same concern.