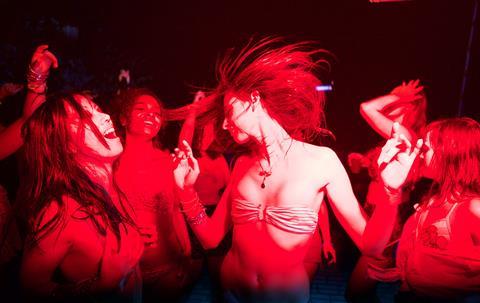 “The following contains extreme strobing… isochronic tones and binaural frequencies are used in this film.” It’s a fair warning, but nothing can fully prepare the audience for the disorientating assault of Der Nachtmahr’s odyssey through teen Berlin’s underground party scene. Coming on like Harmony Korine’s Spring Breakers covered in a sticky layer of psychosis, this is a pounding blitzkrieg of a movie which leaves you questioning your own grip on sanity, let alone that of the fragile kids who inhabit this pill-fuelled twilight world.

The edgy, nerve-shredding quality of the visuals work well to convey the increasing fragility of Tina’s mental state, as one too many come downs start to take their toll.

Premiering in Toronto’s Vanguard competitive section before moving onto the festival circuit with high-profile berths including London, Der Nachtmahr boasts a nervy energy, not to mention the out-and-out weirdness of the premise – think a rave-based horror spin on Donnie Darko – which should help the film connect with a young cult audience, although shortcomings in the screenplay will hinder wider appeal.

Seventeen-year-old Tina (Carolyn Genzkow) is beset by all the anxieties and uncertainties of girls her age. She likes the singularly unprepossessing Adam (Wilson Gonzalez Ochsenknecht), but worries she may have blown her chances by passing out in front of him at a pool party. She’s meant to be working towards her exams but spends her nights strung out in her bra and knickers dancing to music that sounds like the aural equivalent of a hammer attack.

Writer and director AKIZ shoots the club scenes in a colour palette of neon pink and electric blue. His fondness for using an extreme wide angle lens adds to the disorientating effect. It’s fair to say, this is not always a pleasant viewing experience. But the edgy, nerve-shredding quality of the visuals work well to convey the increasing fragility of Tina’s mental state, as one too many come downs start to take their toll.

It’s on the night of the pool party that things start to get genuinely weird for Tina. She sees a creature, a putty grey homunculus with bulging, sightless eyes and a shuffling gait reminiscent of that of ET. It raids her fridge, and potters around in her en suite bathroom, rummaging through the toiletries. But, at first at least, only Tina witnesses it. Her ultra-straight parents reassure her with tight-lipped smiles, as they scramble to reach Berlin’s best psychiatrists on speed dial. Her teacher, played by Sonic Youth’s Kim Gordon, who also contributes to the score, tries to engage with her, with little success. (You do wonder why Tina never attempts to film the creature, particularly given that AKIZ makes an early point of stressing the integral role of mobile phones and social networking in the lives of these nocturnal kids.)

Genzkow is effectively damaged in the role of Tina. All twiglet limbs and huge frightened eyes, she is a haunting – and haunted – screen presence. But she struggles to bridge the gap between the delusional burn-out at the film’s opening and her later symbiotic co-existence with the creature. It takes up residence in her bedroom. She chucks books at the thing when its snuffling and chuntering drowns out the television, but sleeps curled up with it, like some grotesque, hairless plush toy. Repelled by her increasingly odd behaviour, Tina’s friends desert her.

This is billed as the first feature by artist and sculptor AKIZ, although it is worth noting that he has made TV movies and another feature under the name Achim Bornhak. As AKIZ, he is clearly aiming for the Xavier Dolan multi-hyphenate prize: his credits on this film include writer, director, producer, editor, composer, creature creator and model maker. And while the visual and visceral impact of the film is not in question, the sloppy plotting and underpowered characters suggest that, as far as the writing goes, he may be spreading himself a little too thinly.