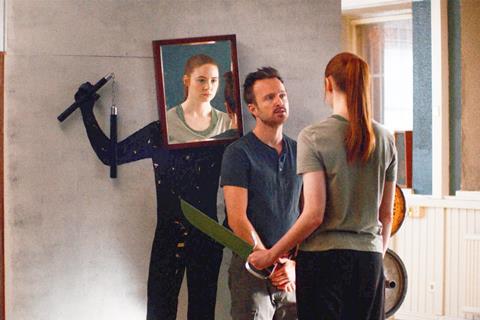 Scots star Karen Gillan is the main selling point of the latest film from Riley Stearns (The Art of Self-Defence) – an odd mix of deadpan satire and high concept sci-fi that some may find off-putting – so it’s handy for him that she offers not one but two intense and stripped-back performances. Her presence, along with that of Westworld’s Aaron Paul, and Dual’s genre trappings are likely to generate wider interest both from festivals and distributors - US rights have already been picked up RLJE Films - after its premiere in the US Dramatic Competition at Sundance.

Gillan’s character Sarah is a far cry from her warrior roles like Marvel’s Nebula or even Jumanji’s Ruby, living a lonely life punctuated by drinking, avoiding conversations with her mum (Maija Paunio), and bland video calls with her boyfriend Peter (Beulah Koale), who is working away from home. Shot in Finland, the cool light and blue tones captured by cinematographer Michael Ragen mirror the sort of casual bleakness that runs through Sarah’s life.

When Sarah is diagnosed with a terminal illness, it prompts one of the film’s many conversations that are delivered in such a deliberately deadpan and affectless style that it borders on the flat. “Nothing is ever absolutely certain, but this most definitely is,” her doctor (June Hyde) tells her. Having clearly never watched any movies about the perils of cloning, Sarah decides to create a “replacement” of herself – an amusingly simple procedure – who will follow her about to soak up her personality, ready to take on Sarah’s life when she dies to ease the pain of her loved ones; a premise the film shares with Apple’s recent Swan Song.

The arrival of this replacement leads to some nicely worked humour as, in effect, Sarah interrogates herself about her likes and dislikes and her appearance, forcing her to think about her life in ways she clearly hasn’t before.(The scenes Sarah shares with her double are also technically well-edited by Sarah Beth Shapiro so that it’s easy to believe there’s two of Gillan.) All the sort of problems you might expect lie ahead, not least that everyone in Sarah’s life likes her double more than her.

And things only get worse when Sarah finds out that she is not terminally ill after all. The difficulty is that, if a clone doesn’t want to be decommissioned, they have the right to “duel to the death” – and so the date is set. This may all sound like spoiler territory but Stearns clearly signposts what is to come both in the film’s title and its first scene, in which a man fights his double after choosing from a curious assortment of weapons – from a gun to a pair of garden shears – in front of a crowd and the TV cameras.

The events are largely played for bone-dry humour, as Sarah takes on a trainer, Trent (Paul), to prepare her for the face-off. The sci-fi concept is really just a fancy framework for Stearns to weave in much more low-tech satire about social discomfort, our all too easy acceptance of violence, corporate influence on our lives and existential crisis in general.

There’s also room for some absurdist black comedy, not least involving her Trent’s dog but, much like those preparing for a duel, there’s always a tendency for Stearns to go for the heaviest weapon and the easiest target. It’s Gillan that keeps things on the rails, somehow making both Sarah and her double sympathetic so that we remain genuinely invested in both of their fates.